The Pulitzer Prize for Music is one of seven Pulitzer Prizes awarded annually in Letters, Drama, and Music. It was first given in 1943. Joseph Pulitzer arranged for a music scholarship to be awarded each year, and this was eventually converted into a prize: "For a distinguished musical composition of significant dimension by an American that has had its first performance in the United States during the year."[1]

Because of the requirement that the composition have its world premiere during the year of its award, the winning work had rarely been recorded and sometimes had received only one performance. In 2004 the terms were modified to read, "For a distinguished musical composition by an American that has had its first performance or recording in the United States during the year."[2]

In his will, dated April 16, 1904, Joseph Pulitzer established annual prizes for a number of creative accomplishments by living Americans, including prizes for journalism, novels, plays, histories and biographies, but did not establish a prize in music, choosing instead to inaugurate an annual scholarship for, "the student of music in America whom the Advisory Board shall deem the most talented and deserving, in order that he may continue his studies with the advantage of European instruction."[3] The Pulitzer Prize for Music was instituted in 1943 to recognize works of: "music in its larger forms as composed by an American."[4] The phrase "music in its larger forms" proved difficult to interpret by the advisory board and by the prize's juries, resulting in controversies over the years.[5] One critic of the award stated: "The Prize Board could hardly have chosen more offensive words to communicate its message."[4]

In 1965, the jury unanimously decided that no major work was worthy of the Pulitzer Prize. In lieu, they recommended a special citation be given to Duke Ellington in recognition of the body of his work, but the Pulitzer Board refused and therefore no award was given that year.[6] Ellington responded: "Fate is being kind to me. Fate doesn't want me to be too famous too young." (He was then sixty-seven years old.)[7] Despite this joke, Nat Hentoff reported that when he spoke to Ellington about the subject, he was "angrier than I'd ever seen him before," and Ellington said, "I'm hardly surprised that my kind of music is still without, let us say, official honor at home. Most Americans still take it for granted that European-based music--classical music, if you will--is the only really respectable kind."[8]

In 1996, after years of internal debate, the Pulitzer Prize board announced a change in the criteria for the music prize "so as to attract the best of a wider range of American music."[7] The result was that the following year Wynton Marsalis became the first jazz artist to win the Pulitzer Prize. However, his victory was controversial because according to the Pulitzer guidelines, his winning work, a three-hour-long oratorio about slavery, "Blood on the Fields", should not have been eligible. Although a winning work was supposed to have had its first performance during that year, Marsalis' piece premiered on April 1, 1994, and its recording, released on Columbia Records, was dated 1995. Yet, the piece won the 1997 prize. Marsalis' management had submitted a "revised version" of "Blood on the Fields" which was "premiered" at Yale University after the composer made seven small changes.[9] When asked what would make a revised work eligible, the chairman of that year's music jury, Robert Ward, said: "Not a cut here and there...or a slight revision," but rather something that changed "the whole conception of the piece." After being read the list of revisions made to the piece, Ward acknowledged that the minor changes should not have qualified it as an eligible work, but he said that "the list you had here was not available to us, and we did not discuss it."[10]

Eight women have been awarded the Pulitzer Prize: Ellen Taaffe Zwilich, 1983; Shulamit Ran, 1991; Melinda Wagner, 1999; Jennifer Higdon, 2010; Caroline Shaw, 2013; Julia Wolfe, 2015; Du Yun, 2017; and Ellen Reid 2019. In addition to being the first woman to receive the award, Ellen Taaffe Zwilich was also the first woman to receive a Doctor of Musical Arts degree in composition at the Juilliard School of Music.[11] Du Yun is the first woman of color who received the award.[12][13][14] George Walker was the first African American composer to win the Prize, which he received for his work Lilacs in 1996.

In 1992 the music jury, which that year consisted of George Perle, Roger Reynolds, and Harvey Sollberger, selected Ralph Shapey's Concerto Fantastique for the award. However, the Pulitzer Board rejected that decision and chose to give the prize to the jury's second choice, Wayne Peterson's The Face of the Night, the Heart of the Dark. The music jury responded with a public statement stating that they had not been consulted in that decision and that the Board was not professionally qualified to make such a decision. The Board responded that the "Pulitzers are enhanced by having, in addition to the professional's point of view, the layman's or consumer's point of view," and they did not rescind their decision.[11]

In 2004, responding to criticism, Sig Gissler, the administrator of the Pulitzer Prizes at the Columbia University School of Journalism, announced that they wanted to "broaden the prize a bit so that we can be more assured that we are getting the full range of the best of America's music..." Jay T. Harris, a member of the Pulitzer governing board said: "The prize should not be reserved essentially for music that comes out of the European classical tradition."[8]

The announced rule changes included altering the jury pool to include performers and presenters, in addition to composers and critics. Entrants are now no longer required to submit a score. Recording will also be accepted, although scores are still "strongly urged." Gissler said, "The main thing is we're trying to keep this a serious prize. We're not trying to dumb it down any way shape or form, but we're trying to augment it, improve it...I think the critical term here is 'distinguished American musical compositions.'"[15] Reaction among Pulitzer Prize in Music winners has varied.

The Pulitzer Prize Advisory Board officially announced: "After more than a year of studying the Prize, now in its 61st year, the Pulitzer Prize Board declares its strong desire to consider and honor the full range of distinguished American musical compositions--from the contemporary classical symphony to jazz, opera, choral, musical theater, movie scores and other forms of musical excellence...Through the years, the Prize has been awarded chiefly to composers of classical music and, quite properly, that has been of large importance to the arts community. However, despite some past efforts to broaden the competition, only once has the Prize gone to a jazz composition, a musical drama or a movie score. In the late 1990s, the Board took tacit note of the criticism leveled at its predecessors for failure to cite two of the country's foremost jazz composers. It bestowed a Special Citation on George Gershwin marking the 1998 centennial celebration of his birth and Duke Ellington on his 1999 centennial year. Earlier, in 1976, a Special Award was made to Scott Joplin in the American Bicentennial year. While Special Awards and Citations continue to be an important option, the Pulitzer Board believes that the Music Prize, in its own annual competition, should encompass the nation's array of distinguished music and hopes that the refinements in the Prize's definition, guidelines and jury membership will serve that end."[16]

Subsequently, in 2006, a posthumous "Special Citation" was given to jazz composer Thelonious Monk,[17] and in 2007 the prize went to Ornette Coleman, a free jazz composer, who won the prize for his disc Sound Grammar, a recording of a 2005 concert, making it the first time a recording won the music Pulitzer, and a first for purely improvised music.[18]

In 2018, rapper Kendrick Lamar won the award for his 2017 hip hop album Damn.[19] The recording was the first musical work not in the jazz or classical genres to win the prize.[20]

Donald Martino, the 1974 winner, said, "If you write music long enough, sooner or later, someone is going to take pity on you and give you the damn thing. It is not always the award for the best piece of the year; it has gone to whoever hasn't gotten it before."[21]

John Corigliano, the winner in 2001, said that although the prize was intended for music that meant something to the world, it had become a very different kind of award, "by composers for composers" and "mired in a pool of rotating jurors."[9]

Composer and music critic Kyle Gann complained in an essay about "The Uptown Prejudice Against Downtown Music" that the judges for the Pulitzer and other top awards for composition often included "the same seven names over and over as judges": Gunther Schuller, Joseph Schwantner, Jacob Druckman, George Perle, John Harbison, Mario Davidovsky, and Bernard Rands. Gann argued that "Downtown" composers, like himself, did not win awards because the composer-judges were all "white men, all of them coming pretty much from the same narrow Eurocentric aesthetic.... These seven men have determined who wins the big prizes in American music for the last two decades. They have made sure that Downtown composers never win."[22]

After winning the Pulitzer in 2003, John Adams expressed "ambivalence bordering on contempt" because "most of the country's greatest musical minds" have been ignored in favor of academic music.[9]

Gunther Schuller welcomed the broadening of the eligibility criteria for the prize in 2004: "This is a long overdue sea change in the whole attitude as to what can be considered for the prize. It is an opening up to different styles and not at all to different levels of quality."[21] Olly Wilson agreed that the changes were "a move in the right direction" because they acknowledge "a wider spectrum of music, including music that is not written down."[21] Some other former prize winners disagreed. John Harbison called it "a horrible development", adding, "If you were to impose a comparable standard on fiction you would be soliciting entries from the authors of airport novels."[21] According to Donald Martino, the prize had "already begun to go in the direction of permitting less serious stuff" before the 2004 changes.[21] Lewis Spratlan, who won the prize in 2000, also objected, saying "The Pulitzer is one of the very few prizes that award artistic distinction in front-edge, risk-taking music. To dilute this objective by inviting the likes of musicals and movie scores, no matter how excellent, is to undermine the distinctiveness and capability for artistic advancement."[21] In 2018, former winner (1970) Charles Wuorinen denounced the jury for awarding the music award to hip-hop artist Kendrick Lamar, telling the New York Times the decision constituted: "the final disappearance of any societal interest in high culture."[23]

Indented entries are finalists after each year's winner.

Four people have won the Pulitzer Prize for Music twice. 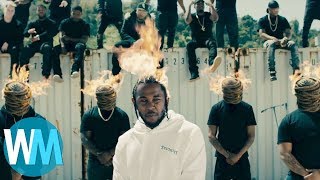 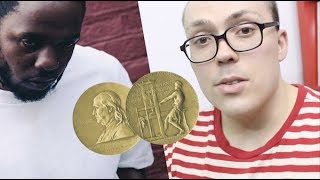 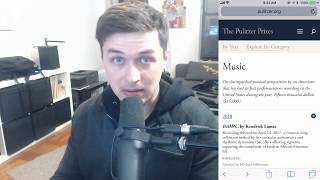 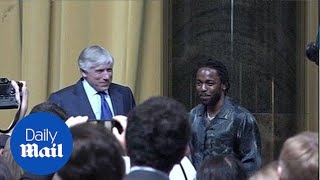 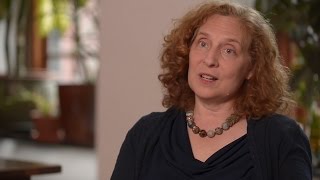 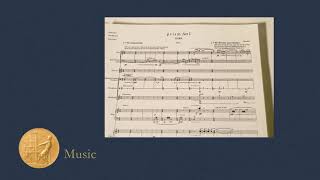 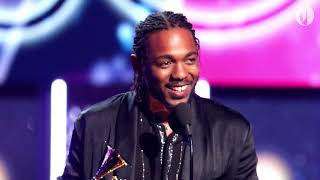 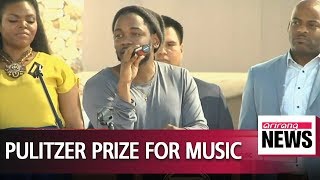 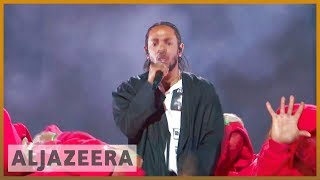 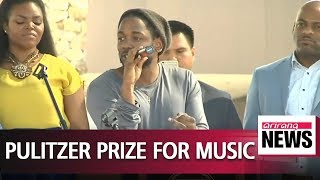 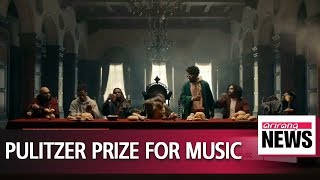 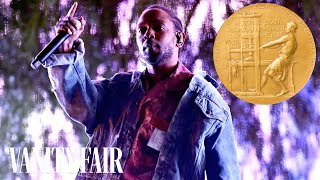 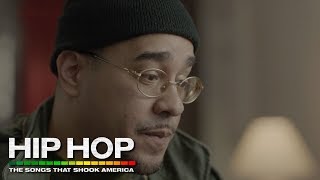 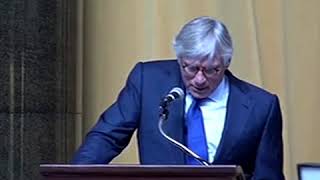 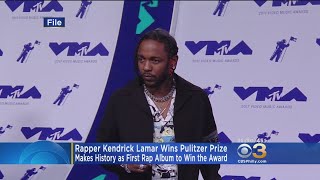 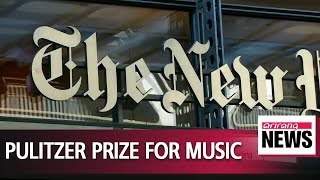 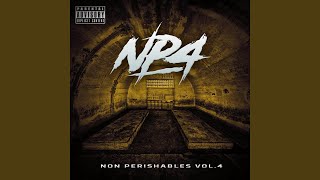