Two artists commonly associated with the group are Tom Thomson (1877-1917) and Emily Carr (1871-1945). Although he died before its official formation, Thomson had a significant influence on the group. In his essay "The Story of the Group of Seven", Harris wrote that Thomson was "a part of the movement before we pinned a label on it"; Thomson's paintings The West Wind and The Jack Pine are two of the group's most iconic pieces.[1] Emily Carr was also associated with the Group of Seven, though never an official member.

Believing that a distinct Canadian art could be developed through direct contact with nature,[2] the Group of Seven is best known for its paintings inspired by the Canadian landscape, and initiated the first major Canadian national art movement.[3] The Group was succeeded by the Canadian Group of Painters in 1933, which included members from the Beaver Hall Group who had a history of showing with the Group of Seven internationally.[4][5] Tom Thomson, J. E. H. MacDonald, Arthur Lismer, Frederick Varley, Frank Johnston and Franklin Carmichael met as employees of the design firm Grip Ltd. in Toronto. In 1913, they were joined by A. Y. (Alexander Young) Jackson and Lawren Harris. They often met at the Arts and Letters Club of Toronto to discuss their opinions and share their art.[1]

This group received monetary support from Harris (heir to the Massey-Harris farm machinery fortune) and Dr. James MacCallum. Harris and MacCallum jointly built the Studio Building in 1914 in the Rosedale ravine to serve as a meeting and working place for the new Canadian art movement. MacCallum owned an island on Georgian Bay and Thomson worked as a guide in nearby Algonquin Park, both places where he and the other artists often travelled for inspiration.[8] The informal group was temporarily split up during World War I, during which Jackson[9] and Varley[10] became official war artists. Jackson enlisted in June 1915 and served in France from November 1915 to 1917, at which point he was seriously injured.[11] Harris enlisted in 1916 and taught musketry at Camp Borden.[12] He was discharged in May 1918 after suffering a nervous breakdown.[12][13] Carmichael, MacDonald, Thomson, Varley and Johnston remained in Toronto and struggled in the depressed wartime economy.[12][nb 1] A further blow to the group came in 1917 when Thomson died mysteriously while canoeing in Algonquin Park. The circumstances of his death remain unclear.[1]

The seven who formed the original group reunited after the war. They continued to travel throughout Ontario, especially the Muskoka and Algoma regions, sketching the landscape and developing techniques to represent it in art. In 1919, they decided to make themselves into a group devoted to a distinct Canadian form of art which did not exist yet, and began to call themselves the Group of Seven.[8] It is unknown who specifically chose these seven men, but it is believed to have been Harris.[14] By 1920, they were ready for their first exhibition thanks to the constant support and encouragement of Eric Brown, the director of the National Gallery at that time. Prior to this, many artists[who?] believed the Canadian landscape was not worthy of being painted. Reviews for the 1920 exhibition were mixed,[15] but as the decade progressed the Group came to be recognized as pioneers of a new, Canadian, school of art.

After Frank Johnston moved to Winnipeg in the fall of 1921, some years passed before A. J. Casson was invited to join in 1926.[8] Franklin Carmichael had taken a liking to him and had encouraged Casson to sketch and paint for many years. The Group's champions during its early years included Barker Fairley, a co-founder of Canadian Forum magazine,[16] and the warden of Hart House at the University of Toronto, J. Burgon Bickersteth.

The members of the Group began to travel elsewhere in Canada for inspiration, including British Columbia, Quebec, Nova Scotia, and the Arctic. After Samuel Gurney Cresswell and other painters on Royal Navy expeditions, these were the first artists of European descent who depicted the Arctic.[] Soon, the Group made the decision that to be called a "national school of painters" there should be members from outside Toronto. As a result, in 1930 Edwin Holgate from Montreal, Quebec became a member, followed by LeMoine FitzGerald from Winnipeg, Manitoba in 1932.[6]

The Group's influence was so widespread by the end of 1931, and after J. E. H. MacDonald's death in 1932, they no longer found it necessary to continue as a group of painters. They announced that the Group had been disbanded and that a new association of painters would be formed, known as the Canadian Group of Painters. The Canadian Group--which eventually consisted of the majority of Canada's leading artists--held its first exhibition in 1933, and continued to hold exhibitions almost every year as a successful society until 1967.

The Group of Seven has received criticism for its reinforcement of terra nullius presenting the region as pristine and untouched by humans when in fact the areas depicted have been lived in for many centuries.[17] This sentiment was expressed by Jackson, who in his 1958 autobiography wrote,

After painting in Europe where everything was mellowed by time and human associations, I found it a problem to paint a country in outward appearance pretty much as it had been when Champlain passed through its thousands of rock islands three hundred years before.[18]

In 1966, the Legislative Assembly of Ontario incorporated the McMichael Canadian Art Collection, an art gallery with an institutional focus on the Group of Seven, along with "their contemporaries and on the aboriginal peoples of Canada".[19] In addition to housing a collection of works by the Group of Seven, the museum property also contains the burial ground for six members of the group, including A.Y. Jackson,[20] Arthur Lismer,[21] Frederick Varley,[22] Lawren Harris,[23] Frank Johnston,[24] and A.J. Casson;[25] along with four of the artists' wives. The McMichael cemetery is situated in the small patch of consecrated land bordered by trees, with graves marked by large chunks of the Canadian Shield. The idea to use the property as a burial ground for the group was first proposed to the institution by Jackson in 1968.[26]

In 1995, the National Gallery of Canada compiled a Group of Seven retrospective show, for which they commissioned the Canadian rock band Rheostatics to write a musical score. That score was released on album as Music Inspired by the Group of Seven.

Contemporary painter Rae Johnson was inspired by Tom Thomson and the Group of Seven in the themes of some of her works and her choice of painting place, as were many other artists.[27][28]

On September 18, 1970, Canada Post issued 'The Group of Seven', designed by Allan Robb Fleming and based on a painting, "Isles of Spruce" (1922), by Arthur Lismer and held in the Hart House Permanent Collection, University of Toronto. The 6¢ stamps are perforated 11, and were printed by Ashton-Potter Limited.[31]

On June 29, 1995, Canada Post issued 10 stamps, each based on a painting of a member of the group (7 original members and 3 additional members):

On May 7, 2020, Canada Post honoured the centennial of the Group's first exhibition, at the Toronto Gallery of Art (May 7, 1920), by issuing seven stamps, featuring paintings by each of the original members.[42] The stamps were produced in a booklet of seven self-adhesives, and on a souvenir sheet of seven gummed stamps. First day ceremonies were cancelled, due to the Covid-19 pandemic, so designs were unveiled online on May 6, via the social media accounts of the postal service and several galleries across the country which own the works featured on the stamps: 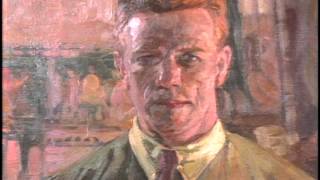 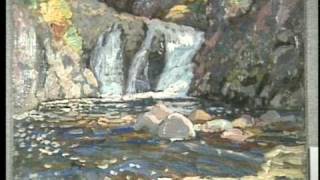 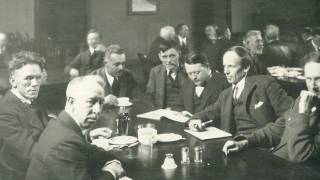 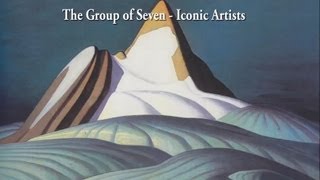 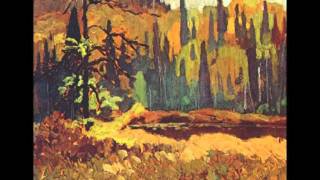 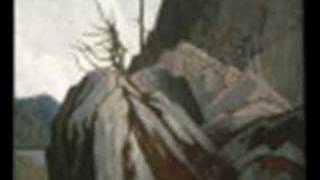 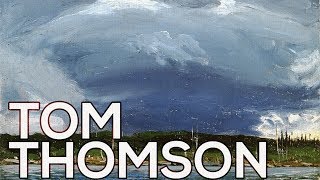 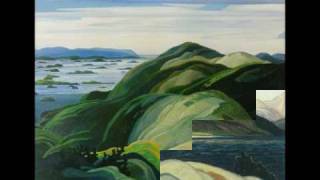 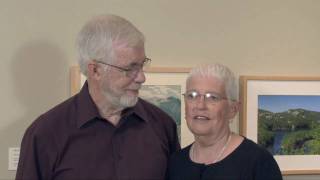 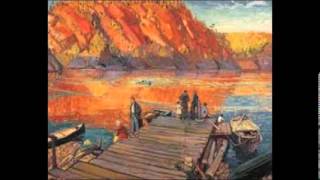 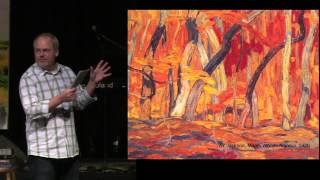 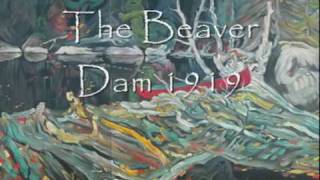 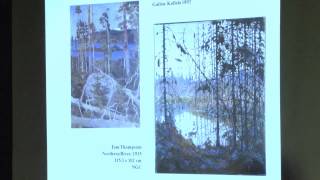 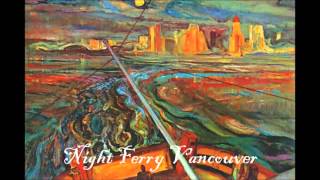 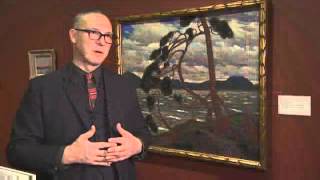 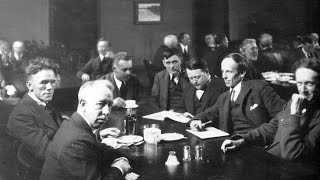 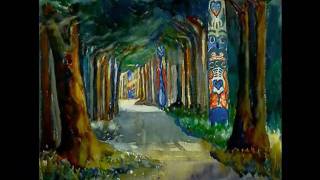