Wantagh ( WAHN-taw) is a hamlet and census-designated place (CDP) in the Town of Hempstead in Nassau County on Long Island, New York, United States. The population of Wantagh was 18,871 at the time of the 2010 census. It is serviced by the Wantagh Station on the Long Island Rail Road.

Wantagh is known as "The Gateway to Jones Beach".[3]

The Wantagh area was inhabited by the Merokee (or Merikoke) tribe of the Metoac Indians prior to the first wave of European settlement in the mid-17th century. The Merokee were part of the greater Montauk tribe that loosely ruled Long Island's Native Americans. Wantagh was the sachem (chief) of the Merokee tribe in 1647,[4] and was later the grand sachem of the Montauk tribe from 1651-1658. The Dutch settlers came east from their New Amsterdam colony, and English settlers came south from Connecticut and Massachusetts settlements. When the English and Dutch settled their competing claims to Long Island in the 1650 treaty conducted in Hartford, the Dutch partition included all lands west of Oyster Bay and thus the Wantagh area. Long Island then was ceded to the Duke of York in 1663-64, but then fell back into Dutch hands after the Dutch regained New York in 1673. The Treaty of Westminster in 1674 settled the land claims once and for all, incorporating Long Island into the now-British colony of New York.[5]

Wantagh was originally known as "Jerusalem", although some early accounts do refer to the area as "Wantagh". The creek running north/south through Wantagh, and which has been covered up in many places but is still visible between the Wantagh Parkway and the housing developments west of Wantagh Avenue, was originally the Jerusalem River. The original post office was built in 1837, for Jerusalem, but mail service from Brooklyn began around 1780. The town's first school was established in 1790.[6] At some time around the 1880s, Jerusalem was renamed Ridgewood, and the town's original LIRR station was named "Ridgewood Station". Later, Ridgewood was renamed Wantagh to avoid confusion with another town in New York State with the same name.

George Washington rode through Jerusalem on April 21, 1790, as part of his 5-day tour of Long Island. The Daughters of the American Revolution have placed a plaque on Hempstead Turnpike to commemorate Washington's travels, which took him from Hempstead on Jerusalem Road (now North Jerusalem Road) to Jerusalem, on to Merrick Road. He then went on to head east, then circle back west on the north shore. During the Revolutionary War, British ships traveled up Jones inlet and came ashore to raid Jerusalem farms.[7]

The oldest original settlers of the Wantagh/Jerusalem area were the Jackson and Seaman families, and their marks are still visible today. For example, the Cherrywood shopping center (at the corner of Jerusalem and Wantagh avenues) was the site of prominent settler Capt. John Seaman's estate, which was named Cherrywood. Wantagh is home to a number of New York State Historical Markers (9 of Nassau County's 25),[8] including:

The Samuel and Elbert Jackson House was listed on the National Register of Historic Places in 2006.[9]

The oldest cemetery in Wantagh is the Jackson Cemetery, located just north of the St. Frances de Chantal Roman Catholic Church on Wantagh Avenue.[10] There are 63 confirmed graves that include descendants from the Seaman and Jackson families, with the most notable including Thomas Jackson, who served in the Revolutionary War in the Second New York Regiment and participated in the Battle of Long Island and the storming of Fort St. George under Major Talmadge in 1780, and who was the original landowner of the site of land around the Wantagh Public Library; and General Jacob Seaman Jackson, a brigadier general in the War of 1812 and senior warden of Long Island's first chartered Masonic lodge in 1797.

The Rierson burial plot was located in what has been redeveloped into Bunker Avenue. This cemetery includes members of the Rierson family who were Loyalists during the Revolutionary War.[11]

The Jerusalem Society of Friends Cemetery is located behind (east of) the current Christian Tabernacle Church. The Society of Friends were Quakers who maintained meeting houses in Jericho, Bethpage, and Hempstead, and met in then-Jerusalem as early as 1697. Capt. John Seaman allowed the Society to conduct meetings on his land in 1699, but the congregation later traveled to Bethpage to worship. The Jerusalem Society of Friends purchased land from another Seaman, Arden Seaman, and then constructed their own meeting house on the site of the current Christian Tabernacle Church in 1827, and added the cemetery in 1861. By the 1940s, the congregation had dwindled significantly, and the property was sold in 1952 to the newly formed Wantagh Baptist Church and then recently sold to the newly formed Christian Tabernacle Church in 2007. The cemetery contains the graves of three Civil War veterans: Lt. H.R. Jackson, Gilbert Seaman, of the 139th Regiment of NY Volunteers, and Charles Wilson, of the 119th Regiment of NY Volunteers and who was wounded in Gettysburg.[12]

The St. John of Jerusalem Cemetery served the German Methodists, who moved to Jerusalem from New York City around 1850 to farm. The cemetery can be found west of Wantagh Avenue a few hundred yards north of North Jerusalem Road (now North Wantagh). The congregation began to meet in 1854 and held services entirely in German. The cemetery was constructed in 1862 and was intended only for use by congregation members and their families. Later generations of congregants grew weary of the services in German, and numbers dwindled until the last German service was held in 1911. From 1912 to 1926, the church remained unused. The church has since been used by a local Lutheran congregation from 1926 to 1940, and a United Christian congregation from 1949 to 1969. Since then, however, the church has remained unused, although the cemetery has been fenced in and maintained by a Board of Trustees. The cemetery contains graves of veterans from the Civil War, Spanish-American War, World War I, World War II, and Vietnam.[13]

The area that became today's Wantagh continued primarily as a farming area until the construction of Sunrise Highway and Jones Beach in the early 20th century, when tourism and fishing took hold, centering on Jones Beach. The Long Island Rail Road has served the town since 1885 (and possibly as early as 1867), but the town did not take on a suburban character until the housing development between the 1950s and 1970s. The LIRR tracks were completely elevated in 1968, along with neighboring Seaford station. The Wantagh Railroad Complex was added to the National Register of Historic Places in 1983.[9]

There were 6,179 households out of which 41.2% had children under the age of 18 living with them, 73.8% were married couples living together, 7.9% had a female householder with no husband present, and 15.6% were non-families. 13.2% of all households were made up of individuals and 7.4% had someone living alone who was 65 years of age or older. The average household size was 3.06 and the average family size was 3.37. Wantagh has been served by Unit 132 of the Nassau County Auxiliary Police since 1952. These volunteer police officers perform routine patrols of the neighborhood and provide traffic control for local parades, races and other community events. Making a major positive impact to the community.

Their headquarters is located in the Willow Wood shopping center located on Wantagh Avenue just south of the Southern State Parkway.

These officers have completed a 48-week training course at the Nassau County Police Academy and are registered with New York State as full-time Peace Officers.

Wantagh is protected by a volunteer fire department that is responsible for one of the largest fire districts in Nassau County covering 12 square miles (31 km2). The Wantagh Fire Department has approximately 250 members using 20 pieces of apparatus located throughout seven stations, two of which are administrative and training locations.

The Wantagh-Levittown Volunteer Ambulance Corps has been serving the community since 1956, and the all-volunteer paramedic and EMT unit is located at 3702 Hempstead Turnpike, Levittown.

Parks in and near Wantagh

The Wantagh Public Library, at 3285 Park Avenue, holds events throughout the year for community members, children, teens, and seniors, and displays local artwork and collections.

Wantagh is primarily served by the Wantagh Union Free School District, which is composed of three elementary schools (Wantagh Elementary School, Mandalay School, and Forest Lake School), Wantagh Middle School, and Wantagh High School. All of these schools have been recognized as New York State Schools of Excellence. In addition, Wantagh is the only school district in New York State in which every school has been recognized as National Schools of Excellence.

Wantagh is also home to the Maplewood School, a private school that offers nursery, pre-school, kindergarten, and summer camp programs.

Commuter rail service in Wantagh is provided by the Wantagh station on the Long Island Rail Road's Babylon Branch. Most parking at the station is limited to Town of Hempstead residents and requires a permit.[18] Express trains to Penn Station average roughly a 45-minute one-way trip.[19] Bus service in Wantagh is provided by the n19 line of the Nassau Inter-County Express along Merrick Road.

Merrick Road, the Seaford - Oyster Bay Expressway, Sunrise Highway and the Wantagh State Parkway all traverse and have major intersections or exits/entrances within Wantagh. 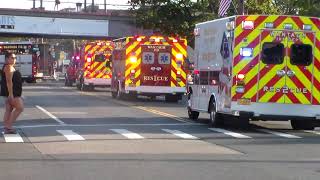 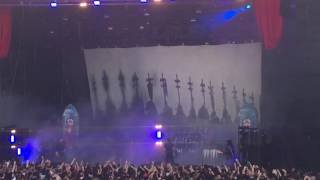 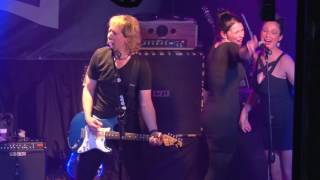 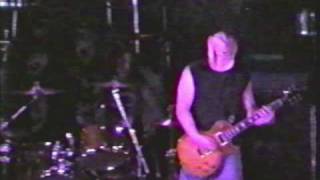 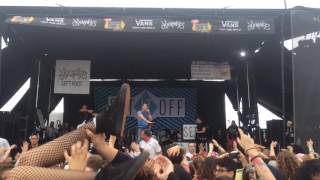 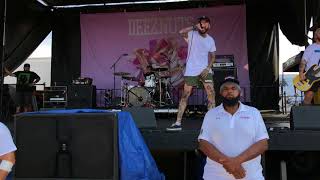 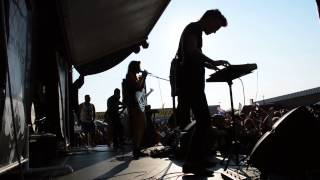 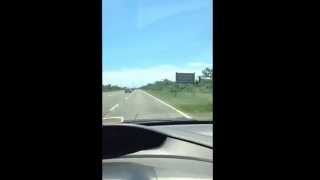 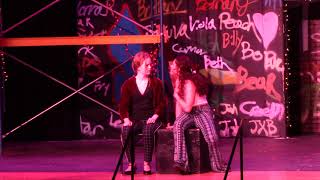 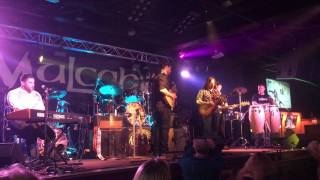 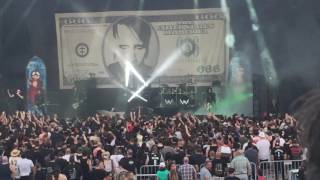 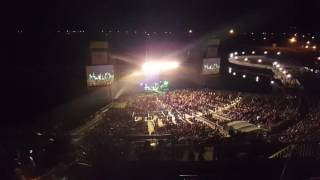 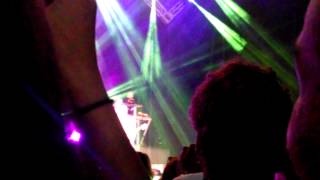 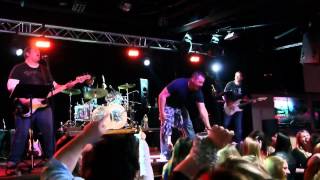 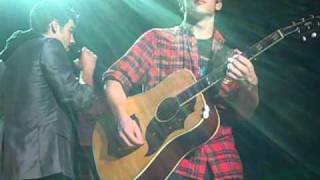 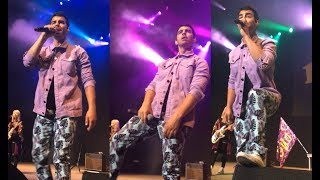 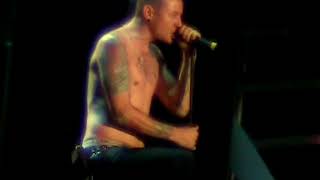