Ste;phane Grappelli (French pronunciation: %u200B[stefan ap?li]; 26 January 1908 – 1 December 1997) was a French jazz violinist who founded the Quintette du Hot Club de France with guitarist Django Reinhardt in 1934. It was one of the first all-string jazz bands. He has been called "the grandfather of jazz violinists" and continued playing concerts around the world well into his 80s.[1]

For the first three decades of his career, he was billed using a gallicised spelling of his last name, Grappelly, reverting to Grappelli in 1969. The latter, Italian spelling, is now used almost universally when referring to the violinist, including reissues of his early work.

Grappelli was born at Hpital Lariboisire in Paris, France, and christened with the name Ste;fano. His father, an Italian Marchese,[] Ernesto Grappelli, was born in Alatri, Lazio, and his French mother, Anna Emilie Hanoque, was from St-Omer. His father was a scholar who taught Italian, sold translations, and wrote articles for local journals.[2] His mother died when he was five, leaving his father to care for him.[3] Though living in France when World War I began, his father was still an Italian citizen and was drafted to fight for Italy in 1914.

Having written about American dancer Isadora Duncan, who was living in Paris, Ernesto Grappelli appealed to her to care for his son. He was enrolled in Duncan's dance school at age six, and he learned to love French Impressionist music. With the war encroaching, Duncan as an American citizen fled the country; she turned over her chteau to be used as a military hospital.[4] Ernesto Grappelli entrusted his son to a Catholic orphanage. Grappelli said of this time:

I look back at it as an abominable memory... The Place was supposed to be under the eye of the government, but the government looked elsewhere. We slept on the floor, and often were without food. There were many times when I had to fight for a crust of bread[4]

Grappelli compared his early life to a Dickens novel[3] and said that he once tried to eat flies to ease his hunger.[4] He stayed at the orphanage until his father returned from the war in 1918, settling them in an apartment in Barbs. Having been sickened by his experiences with the Italian military, his father took him to city hall, pulled two witnesses off the street, and had his son nationalized as a Frenchman on July 28, 1919.[4] His first name "Ste;fano" was Gallicized to "Ste;phane". He began playing the violin at age 12 on a three-quarter sized violin that his father bought after pawning a suit. Although he was sent to violin lessons, he preferred learning on his own.

My first lessons were in the streets, watching how other violinists played...The first violinist that I saw play was at the Barbs me;tro station, sheltered under the overhead metro tracks. When I asked how one should play, he exploded in laughter. I left, completely humiliated with my violin under my arm.[4]

After a brief period of independent learning, he was enrolled at the Conservatoire de Paris on December 31, 1920, which his father hoped would give him a chance to learn music theory, ear-training, and solfeggio. In 1923 Grappelli graduated with a second-tier medal.[4] His father married Anna Fuchs and moved to Strasbourg. Grappelli remained in Paris because he disliked Fuchs.[4]

At age 15, Grappelli began busking full-time to support himself. His playing caught the attention of an elderly violinist who invited him to accompany silent films in the pit orchestra at the The;tre Gaumont. He played there for six hours daily over a two-year period.[5] During orchestra breaks, he visited Le Boudon, a brasserie, where he would listen to songs from an American proto-jukebox. Here he was introduced to jazz. He was playing in the orchestra at the Ambassador in 1928 when Paul Whiteman was performing with Joe Venuti. Jazz violinists were rare, and though Venuti played mainly commercial jazz themes and seldom improvised, Grappelli was struck by his bowing when he played "Dinah".[5] He began developing a jazz-influenced style.

In 1930, Gre;gor ran into financial trouble. He was involved in an automobile accident that resulted in deaths, fleeing to South America to avoid arrest.[6] Gre;gor's band reunited as jazz ensemble under the leadership of pianist Alain Romans and saxophonist Andre; Ekyan. While playing with this band, Grappelli met gypsy jazz guitarist Django Reinhardt in 1931. Looking for a violinist interested in jazz, he invited Grappelli to play with him at his caravan. Although the two played for hours that afternoon,[7] their commitments to their respective bands prevented them from pursuing a career together.

In 1937, American jazz singer Adelaide Hall and her husband Bert Hicks opened the nightclub La Grosse Pomme in Montmartre. She entertained nightly and hired the Quintette as one of the house bands.[9] Also in the neighborhood was the artistic salon of R-26, at which Grappelli and Reinhardt performed regularly.[10]

For the first three decades of his musical career, Grappelli was billed "Ste;phane Grappelly", a Gallicized form of his name. He took back the Italian spelling of his last name, he said, to keep people from pronouncing his surname "Grappell-eye".

The Quintette du Hot Club de France disbanded in 1939 at the outbreak of World War II; Grappelli was in London and stayed there during the war. In 1940, jazz pianist George Shearing made his debut as a sideman in Grappelli's band.

In 1949, Reinhardt and Grappelli reunited for a brief tour of Italy,and made a series of recordings with an Italian group. The two recorded roughly 50 tracks during this time. About half were compiled for the album Djangology (released in 2005).

Grappelli first collaborated with the classical musician Yehudi Menuhin when British chat-show host Michael Parkinson introduced them on TV in December 1971 to duet playing Jalousie. Another Parkinson TV performance followed in 1976, by which time the pair had put out three albums together on EMI. In the TV show[11] Menuhin played his prized Stradivari dating from 1714, while Grappelli revealed his instrument was made by Goffredo Cappa in 1695.

In April 1973 he was invited as guest for concerts at the Jazz Club "Jazz Power" in Milan, where he performed with an Italian jazz combo, including guitarist Franco Cerri, pianist Nando De Luca, bassist Pino Presti, and drummer Tullio De Piscopo.

Grappelli recorded a solo for the title track of Pink Floyd's 1975 album Wish You Were Here. This was made almost inaudible in the mix, and so the violinist was not credited, according to Roger Waters, as it would be "a bit of an insult".[] A remastered version with Grappelli's contribution fully audible can be found on the 2011 editions of Wish You Were Here.

Grappelli made a cameo appearance in the 1978 film King of the Gypsies with mandolinist David Grisman. Three years later they performed in concert. In the 1980s he gave several concerts with British cellist Julian Lloyd Webber. In 1997, Grappelli received the Grammy Lifetime Achievement Award. He is an inductee of the Down Beat Jazz Hall of Fame.

Grappelli was gay.[12][13][14][15][16] In May 1935, however, he had a brief affair with Sylvia Caro that resulted in a daughter named Evelyne. Sylvia remained in Paris with her daughter for the duration of the war. Father and daughter were reunited in 1946 when Evelyne travelled to London from France to stay with Grappelli for about a year.[17] Grappelli never married,[18] although from 1952 to 1980 he shared much of his life with a companion, Jean Barclay, with whom he enjoyed domesticity at times in a number of houses in the UK and France.[19]

Biographer Paul Balmer suggests that the love of Grappelli's life may have been an English beauty named Gwendoline Turner. She was killed in London in 1941 during The Blitz. Grappelli cried intermittently for two years after her death. He kept a lock of her hair and an oil portrait of her for the rest of his life.[20]

He died in Paris after undergoing a hernia operation. He is buried in the city's Pre Lachaise Cemetery. 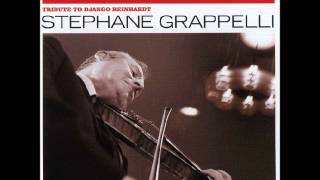 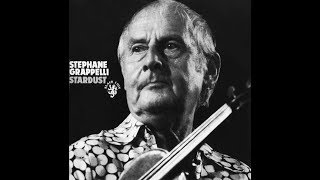 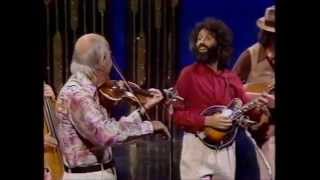 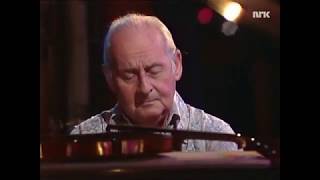 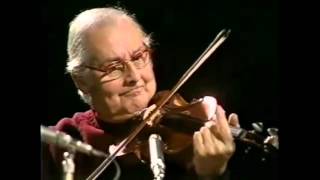 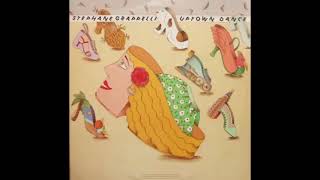 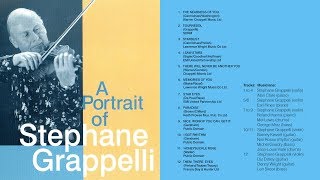 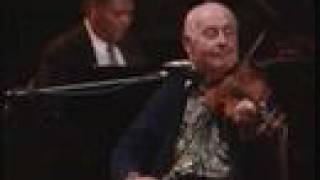 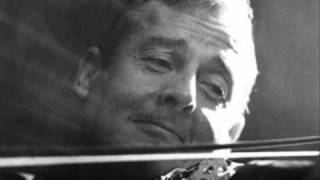 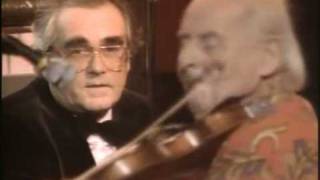 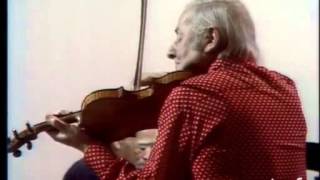 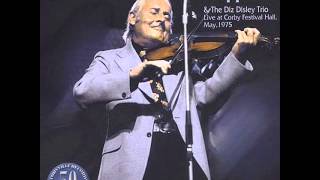 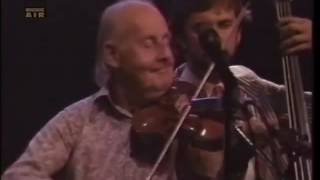 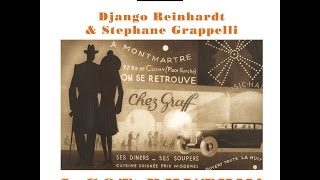 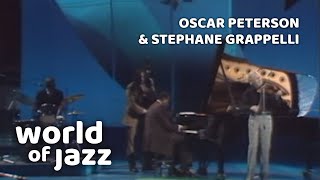 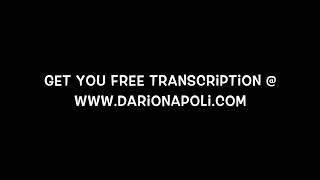 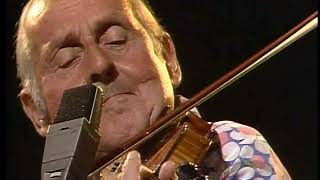 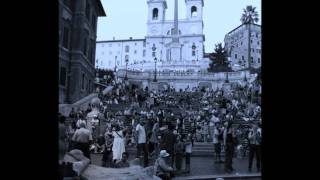 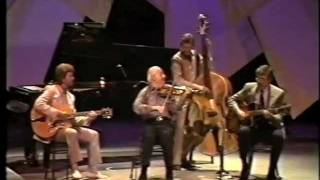