Learn
Sipsongpanna
Get Sipsongpanna essential facts below, , or join the Sipsongpanna discussion. Add Sipsongpanna to your PopFlock.com topic list for future reference or share this resource on social media.
Sipsongpanna
Autonomous prefecture in Yunnan Province, People's Republic of China

Xishuangbanna, Sibsongbanna or Sipsong Panna (Tham?, New Tai Lü script: ; Chinese: ; Thai: ; Lao: ; Shan: ?; Burmese: ), shortened to Banna, is an autonomous prefecture for Dai people in the extreme south of Yunnan Province, China, bordering both Myanmar and Laos. The prefectural seat is Jinghong, the largest settlement in the area and one that straddles the Mekong, called the "Lancang River" in Chinese.[3]

This region of China is noted for the distinct culture of its ethnic groups, one that is very different from that of the Han Chinese. The people, architecture, language and culture more closely resemble those of the Shan, Dai and Tai peoples, which includes the Thai and Lao.

Sipsongpanna (cognate to the Thai , RTGS: Sipsong Panna) is a Tai Lü compound consisting of sipsong "twelve", pan "township" and na "rice paddy". The name refers to the traditional division of the mueang into twelve districts that were called panna (literally "township rice-fields")[4][5] The etymology is parallel to the autonomous Tai-speaking region in French Indochina from 1890 to 1945 called Sip Song Chau Tai meaning "twelve Tai cantons".

Before 1886,the region was part of the Konbaung Dynasty of Myanmar.In 1886,British occupied Myanmar Emperor.At this time,Qing Dynasty of China occupied this region and The region became a part of the Tai Lü kingdom of Chiang Hung. Chiang Hung submitted to the Qing dynasty during the 19th century.

In the chaos of the Xinhai Revolution that overthrew the Qing government in 1911 in favor of a Chinese republican government, a local official, Chao Meeng Jie, staged a rebellion against Qing remnant officials. The Yunnan provincial government of the newly established Republic of China sent troops in 1913 to oust the rebels.[6]:137-138 Ke Shuxun remained in Xishuangbanna to govern with his "13 Principles of Governing the Frontier", which emphasized equality between Han and Dai in areas such as land ownership and taxation, allowed intermarriage between the ethnic groups and promoted education in secular and technical subjects, rather than Burmese-based monastic education.[6]:156-158 The Second Sino-Japanese War (1931-1945) saw the heavy bombardment of Xishuangbanna by Japanese troops and a simultaneous influx of Pan-Taiist propaganda from Japan's ally, Thailand. According to Hsieh,[6]:173-174 this reduced the appeal of a broad pan-Tai identity among the Dai Lue.

During the final phase of the Chinese Civil War, many remnants of the Kuomintang fled from Communists forces into Burma's Shan State from Xishuangbanna. The new People's Republic of China sent various non-military expeditions to Xishuangbanna from 1949 to provide services such as schools and hospitals to replace those from Christian western missionaries.[6]:193-194

The Communists took control of the prefecture from Kuomintang loyalists in 1952. On January 23, 1953, the PRC established the Xishuangbanna Dai Autonomous Region and ended the native-chieftain system. That year, the People's Congress of Xishuangbanna created the New Tai Lue alphabet, based on the Tai Tham alphabet, for printing material in the Tai Lü language.[6]:243-244

Xishuangbanna was made an autonomous prefecture in 1955 but lost some territory on the creation of Jingdong Yi Autonomous County and Jiangcheng Hani and Yi Autonomous County.[6]:40Land reform started in earnest in January 1956, destroying the power of the village headmen.[6]:188-189, 211 State-owned rubber plantations accounted for most of the region's wealth during the early PRC period.

Xishuangbanna also received an influx of educated youth during the Down to the Countryside Movement of the Cultural Revolution (1966-1976). During this period Buddhist temples in Xishuangbanna were used as barns, only being restored to their original purpose in 1981.[6]:239

The prefecture has an area of 19,700 km2 (7,600 sq mi). Xishuangbanna is the home of the Dai people. The region sits at a lower altitude than most of Yunnan, and borders closely on tropical climate. It is fast becoming a sought after tourist destination. It has close proximity to Myanmar, Laos, and Thailand. Xishuangbanna harbors much of the biodiversity of Yunnan, which harbors much of the biodiversity of China. Its tropical climate and its remoteness until recent times account for this. In addition to an abundance of plants, Xishuangbanna is home to the last few Asian elephants still in China; the species roamed over a large part of the country even as late as a few hundred years ago. The elephants are protected in a reserve, but the plant diversity is threatened by, and has for five decades been threatened by, the proliferation of natural rubber plantations which completely destroy the rainforest and replace it with a monoculture of trees originally from Brazil.[10]

Passiflora xishuangbannaensis is a recently discovered passiflora species that is endemic to Xishuangbanna.

Before the increasing social mobility of the 1940s, inhabitants of Xishuangbanna called each other "basin people" (?; bàq? mínzú) or "mountain people" (?; sh?nq? mínzú) in reference to the groups' stereotyped location. The Han and Dai lived mostly around the mountains and played a socially dominant role, while the non-Dai ethnic minorities lived in the basins and were politically disenfranchised.[6]:44, 52 The Dai used to be called the Baiyi (), and until a 1936 Kuomintang reform, the bai part was written with the dog radical (?). The PRC government decided that regardless of radical, the term Baiyi is pejorative, and adopted Dai (?) instead.[6]:257 Historically, some ethnic minorities adapted some Dai characteristics in order to alleviate discrimination and increase their social status, such as the Blang people adopting the sarong, practicing matrilocal residence, and learning the Tai Tham alphabet.[6]:54 The Blang village of Manpo.

In Jinghong City and Menghai County, the two major Hani subgroups are Jiuwei and Jizuo .[11] The Jizuo are the largest Hani ethnic subgroup in Jinghong.

The Jiuwei claim to have migrated from Honghe and Mojiang. The Jiuwei live in various villages in Jinghong, including: The Six famous tea mountains region (Chinese: ?; pinyin: Liù Dà Chá Sh?n) located in the prefecture produce some of the most highly regarded Pu-erh tea in the 20th century.

Xishuangbanna is rich in nature, historical and cultural resources, noted for its folklore, rain forests, rare plants, and wildlife. Its major tourist attractions include Menglun Tropical Botanical Garden, Manfeilong Pagodas (Tanuozhuanglong), Jingzhen Pavilion, Wild Elephant Gully, Dai people's village at Ganlanba.[] The Manchunman Buddhist Temple, which has a history of more than 1400 years, is also a very popular tourist attraction. The complex is made up of four parts, the main hall, the sutra collection pavilion, the gold pagoda, and the drum tower. The temple is well known within the Southeast Asian region and each year attracts Buddhist monks and visitors from Sri Lanka, Thailand, Myanmar and Laos.[13]

The well-known traditional festival is the Dai New Year, known as the Water-Splashing Festival. It lasts for three days from April 13 to 15. Besides the water festival event it also consists of some other events such as Dragon boat races, the firing of indigenous missiles, flying Kongming Lamps.[]

Since the opening of the Xishuangbanna Gasa Airport (formerly "Jinghong International Airport") in 1990, traveling to Xishuangbanna by air has become more popular and convenient and there are daily flights connecting Xishuangbanna with Kunming City. The area also has air connections with Dali, Chengdu and Bangkok. The Xishuangbanna Airport is 6 km (3.7 mi) south of Jinghong City.

There are also bus routes to places all over Yunnan and neighboring provinces. It is 590 kilometers from Kunming to Jinghong. Long-distances buses depart from Kunming South Station and arrive at Jinghong Bus Station, costing CNY 210-250, which is about 8-10 hours duration.[14]

In October 2010, plans were announced for a 530 km (330 mi) railway linking Xishuangbanna to Vientiane, Laos;[15] connections to Thailand are also possible.[16] 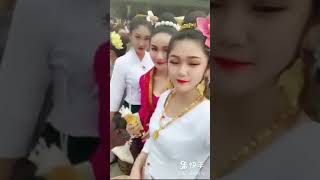 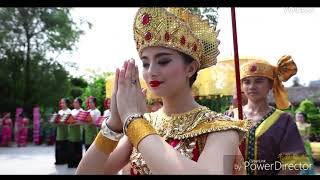 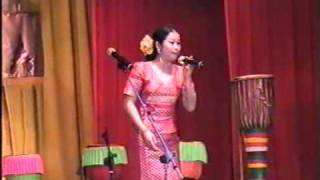 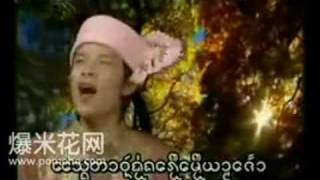 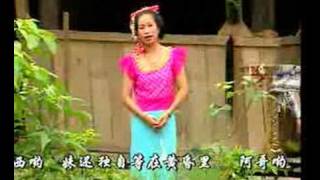 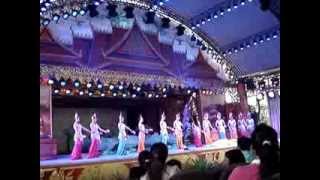 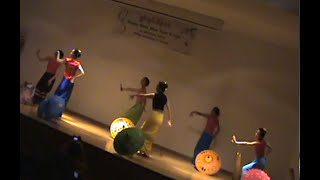 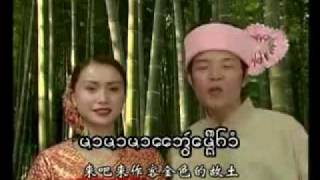 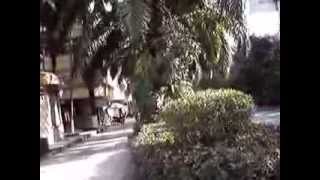 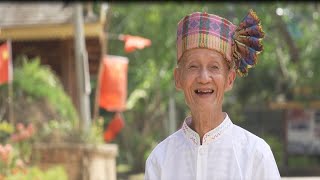 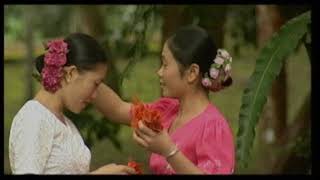 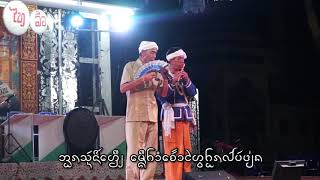 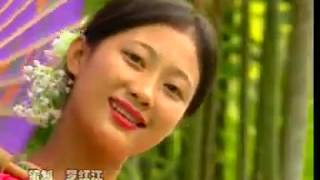