Seaside Heights is a borough in Ocean County, New Jersey, United States. As of the 2010 United States Census, the borough's population was 2,887,[10][11][12] reflecting a decline of 268 (-8.5%) from the 3,155 counted in the 2000 Census, which had in turn increased by 789 (+33.3%) from the 2,366 counted in the 1990 Census.[21] Seaside Heights is situated on the Barnegat Peninsula, a long, narrow barrier peninsula that separates Barnegat Bay from the Atlantic Ocean. During the summer, the borough attracts a crowd largely under the age of 21, drawn to a community with boardwalk entertainment and one of the few shore communities with sizable numbers of apartments, attracting as many as 65,000 people who are often out until early morning visiting bars and restaurants.[22]

Seaside Heights was incorporated as a borough by an act of the New Jersey Legislature on February 26, 1913, from portions of both Berkeley Township and Dover Township (now Toms River Township), based on the results of a referendum held on March 25, 1913.[23] The borough was named for its location on the Atlantic Ocean.[24]

As a resort community, the beach, an amusement-oriented boardwalk, and numerous clubs and bars, make it a popular destination. Seaside Heights calls itself, "Your Home For Family Fun Since 1913!"[25] The beach season runs from March to October, with the peak months being July and August, when the summer population explodes to 30,000 to 65,000.[22][26]Route 37 in Toms River is routinely gridlocked on Friday afternoons in the summer months as vacationers travel to the barrier islands. The community is also known as the location of the hit MTV show Jersey Shore, with the director of the borough's business improvement district saying in 2010 that "we can't even calculate the economic benefit" to Seaside Heights from the continued presence of the show.[27]

In 1915, Senate Amusement Company of Philadelphia planned to build an ocean-side attraction in Seaside Heights within feet of the border to Seaside Park. Their plan was to build a covered pier to house a carousel. The structure was built in 1915 under the direction of Joseph Vanderslice of Senate Amusement Company. Budget issues stalled the project in 1916, and the amusement ride and building was subsequently sold to Frank Freeman. The combination of the completion of the Toms River Bridge on October 23, 1914,[28] and the DuPont Avenue carousel and boardwalk are what likely led to the 159% population growth shown between the 1920 and 1930 censuses in Seaside Heights.[29]

On June 9, 1955, a malfunctioning neon sign component caused a fire at a shop on the corner of Ocean Terrace and DuPont Avenue. The fire was driven by winds estimated at 50 miles per hour (80 km/h), blowing the fire south and engulfing the entire pier. The fire was stopped at Stockton Avenue due in part to the fact that the boardwalk and pier ended there. In what became known as Freeman's Fire, a total of 85 buildings were destroyed with an estimated $4 million in damage.[30]

Beginning on October 29, 2012, substantial portions of the boardwalk were damaged and much of the borough was flooded as a result of Hurricane Sandy. Both the Funtown Pier and Casino Pier suffered major damage, with sections of both piers torn apart by powerful storm surges and waves causing many of the rides to collapse into the ocean.[31] With a curfew set at 4:00 pm to prevent looting, a New Year's Eve party was held at the Beachcomber for hundreds of area residents at which the arrival of 2013 was celebrated at 3:00 in the afternoon.[32] Casino Pier began cleanup attempts soon after, in an attempt to reopen in time for the summer 2013 season. The Star Jet roller coaster that fell into the water with the Casino Pier had become an attraction in itself. It was taken apart by a wrecker from Weeks Marine on May 14, 2013, just a short time after Prince Harry of Wales' visit to the site the same day with Governor Chris Christie. Repairs to the boardwalk were completed on June 21, 2013, with New Jersey's First Lady, Mary Pat Christie, hammering the nail into the final board of the project.[33]

On September 12, 2013, a ten-alarm fire swept from the Funtown Pier northward.[34] The fire is believed to have started under the boardwalk, below the Kohr's Kustard stand at the southern end of the pier. The wind pushed it northward, and fire crews were able to make a stand at Lincoln Avenue by tearing up the newly replaced boardwalk which had been destroyed less than a year before by Hurricane Sandy.[35] Jack & Bill's Bar and Kohr's Kustard were two businesses that were both destroyed in the 1955 and 2013 fires.

Seaside Heights hosted the AVP volleyball tournament for two years during the summers of 2006 and 2007, with volleyball greats such as Karch Kiraly competing for a $200,000 purse.[47]

Funtown Pier boardwalk all fixed up in 2016.

Casino Pier and Funtown Pier (partially located within both Seaside Heights and neighboring Seaside Park) are amusement parks, each situated on a pier extending approximately 300 feet (100 m) into the Atlantic Ocean. Each of the two piers are part of a boardwalk that stretches for 2 miles (3.2 km) and offers many family-friendly attractions ranging from arcades, to games of chance, to beaches, and to the wide variety of foods and desserts, all within walking distance.[48] Breakwater Beach (formerly known as Water Works) is a water park situated across the street from Casino Pier.

Seaside Heights is governed under the Borough form of New Jersey municipal government, which is used in 218 municipalities (of the 565) statewide, making it the most common form of government in New Jersey.[49] The governing body is comprised of the Mayor and the Borough Council, with all positions elected at-large on a partisan basis as part of the November general election. A Mayor is elected directly by the voters to a four-year term of office. The Borough Council is comprised of six members elected to serve three-year terms on a staggered basis, with two seats coming up for election each year in a three-year cycle.[7] The Borough form of government used by Seaside Heights is a "weak mayor / strong council" government in which council members act as the legislative body with the mayor presiding at meetings and voting only in the event of a tie. The mayor can veto ordinances subject to an override by a two-thirds majority vote of the council. The mayor makes committee and liaison assignments for council members, and most appointments are made by the mayor with the advice and consent of the council.[50][51]

In the November 2011 general election, William Akers was elected to a four-year term as mayor and incumbent councilmembers Agnes Polhemus and Anthony E. Vaz were elected to three-year terms on the borough council. The three Republicans will take their new seats in January 2012.[61]

Mayor Hershey had been in politics in Seaside Heights uninterrupted for over 35 years and had been first elected as Mayor in 1992. His predecessor George Tompkins (father of current councilman Rich Tompkins) served 16 years from 1975-1991, and Mayor J. Stanley Tunney served for 25 years from 1939-1964. Councilwoman Agnes Polhemus served from 1972-1993, and returned in 2006. Joann Duszczak served on the Borough Council for more than a decade before her death in December 2010.[62]

Seaside Heights is located in the 3rd Congressional District[64] and is part of New Jersey's 10th state legislative district.[11][65][66]

The Seaside Heights School District is a public school district for students in pre-kindergarten through sixth grade at Hugh J. Boyd Jr. Elementary School. As of the 2017-18 school year, the district, comprised of one school, had an enrollment of 234 students and 23.0 classroom teachers (on an FTE basis), for a student-teacher ratio of 10.2:1.[95] The original school, Seaside Heights Elementary School, was built in 1926 and later demolished after the opening of a larger school building on the bay front. The current school was built in the late 1960s, and is dedicated to Hugh J. Boyd Jr., its longtime Superintendent of Schools who died in 1983.[96] Its Early Childhood Center addition was dedicated in 2007 in the name of longtime Board of Education Member Harry M. Smith III.[97] The Board of Education is made up of five members, each elected to three-year terms on a staggered basis, with one or two seats up for election each year.[98]

Public school students in seventh through twelfth grades attend the schools of the Central Regional School District, which also serves students from the municipalities of Berkeley Township, Island Heights, Ocean Gate and Seaside Park.[100] Schools in the district (with 2017-18 enrollment data from the National Center for Education Statistics[101]) are Central Regional Middle School[102] for grades 7 and 8 (761 students) and Central Regional High School[103] for grades 9 - 12 (1,401 students).[104][105] The district's Board of Education consists of nine members, who are directly elected by the residents of the constituent municipalities to three-year terms of office on a staggered basis, with three seats up for election each year.[106] Seaside Heights is allocated one of the board's nine seats.[107]

NJ Transit provides seasonal bus service in Seaside Heights on the 137 route to the Port Authority Bus Terminal in Midtown Manhattan and to Pennsylvania Station in Newark and the Journal Square Transportation Center in Jersey City on the 67 line.[110]

According to the Köppen climate classification system, Seaside Heights, New Jersey has a humid subtropical climate (Cfa) with hot, slightly humid summers, cool winters and year-around precipitation. Cfa climates are characterized by all months having an average mean temperature > 32.0 °F (> 0.0 °C), at least four months with an average mean temperature >= 50.0 °F (>= 10.0 °C), at least one month with an average mean temperature >= 71.6 °F (>= 22.0 °C) and no significant precipitation difference between seasons. During the summer months in Seaside Heights, a cooling afternoon sea breeze is present on most days, but episodes of extreme heat and humidity can occur with heat index values >= 95 °F (>= 35 °C). During the winter months, episodes of extreme cold and wind can occur with wind chill values < 0 °F (< -18 °C). The plant hardiness zone at Seaside Heights Beach is 7a with an average annual extreme minimum air temperature of 3.7 °F (-15.7 °C).[114] The average seasonal (November-April) snowfall total is between 18 to 24 inches (46 to 61 cm) and the average snowiest month is February which corresponds with the annual peak in nor'easter activity.

Prior to Jersey Shore, the town was also the setting of MTV's True Life: I Have A Summer Share, which was filmed in Seaside Heights, as was MTV's True Life: I'm a Jersey Shore Girl from 2004, which was one of the network's first stories of guidettes looking for the perfect guido.[48][121] Additionally, the MTV summer beach house was located in Seaside Heights for many summers in the early 2000s.[48][122]

In 1985, New Jersey rock band Bon Jovi filmed most of their music video for the song "In and Out of Love" in Seaside Heights, mainly on the boardwalk.[48][123]

Portions of the 2006 movie Artie Lange's Beer League were filmed in Seaside Heights.[124]

The ABC soap opera One Life to Live filmed a portion of its 2008 storyline in Seaside Heights, mainly on the beach and boardwalk.[125]

People who were born in, residents of, or otherwise closely associated with Seaside Heights include: 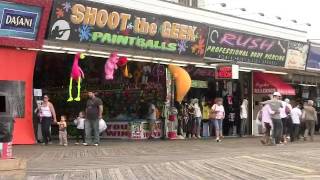 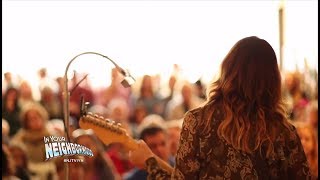 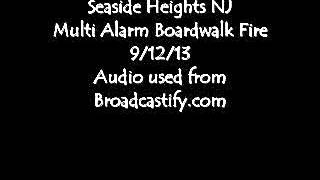 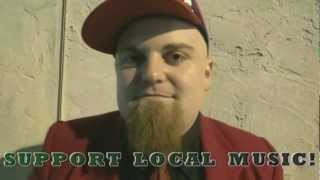 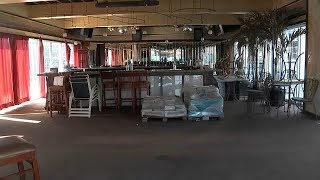 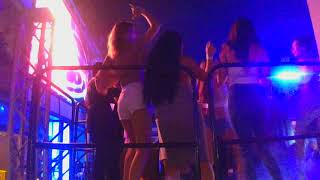 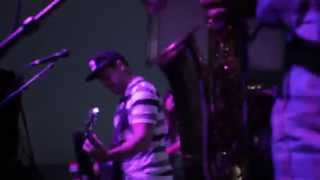 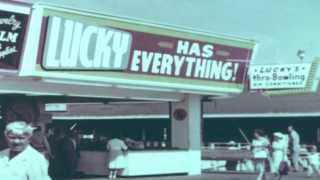 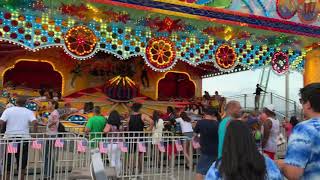 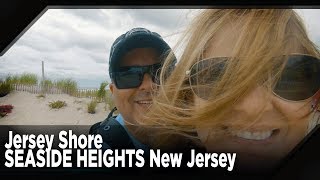 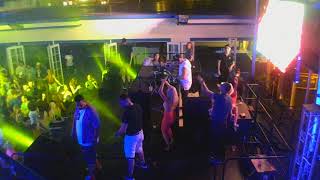 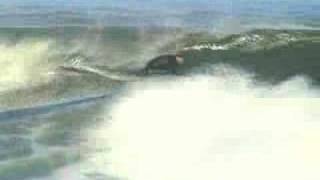 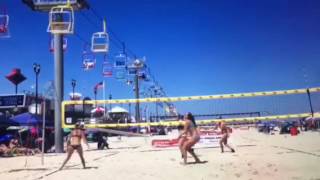 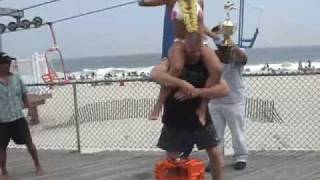 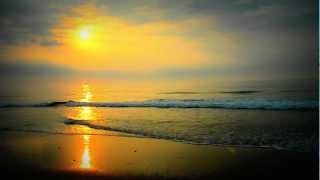 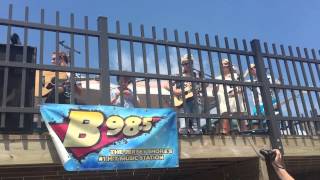 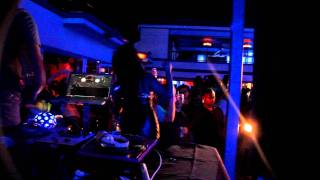 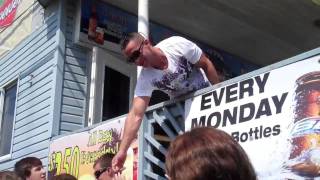