Promises, Promises is a musical that premiered in 1968, based on the 1960 film The Apartment. The music is by Burt Bacharach, with lyrics by Hal David and book by Neil Simon. Musical numbers for the original Broadway production were choreographed by Michael Bennett. Robert Moore directed, and David Merrick produced. The story concerns a junior executive at an insurance company who seeks to climb the corporate ladder by allowing his apartment to be used by his married superiors for trysts.

The original Broadway production premiered in 1968, with Jerry Orbach as Chuck Baxter and Jill O'Hara as Fran Kubelik, and ran for 1,281 performances. A London production opened in 1969 featuring Tony Roberts and Betty Buckley. The cast album won the Grammy Award for Best Musical Theater Album, and two songs from the show (the title tune and "I'll Never Fall in Love Again") became hit singles for Dionne Warwick.

The show was first produced in London's West End at the Prince of Wales Theatre in 1969, featuring Tony Roberts and Betty Buckley. It ran for 560 performances.[2]

A reading for a revival of the musical was held in October 2008 with Sean Hayes and Anne Hathaway.[3]

The revival opened at the Broadway Theatre on April 25, 2010, after previews starting on March 27. Directed and choreographed by Rob Ashford, the revival starred Sean Hayes, Kristin Chenoweth, Brooks Ashmanskas, Katie Finneran, and Tony Goldwyn.[4] The Bacharach-David songs "I Say a Little Prayer", a 1967 million-selling hit written for Dionne Warwick, and "A House Is Not a Home" were added to the score.[5]

Due to pregnancy, Katie Finneran departed the role of Marge on October 10, 2010,[6] and was replaced by Saturday Night Live veteran Molly Shannon. Hayes, Chenoweth, and Shannon remained with the production until its closing on January 2, 2011. The show had 291 performances and 30 previews.[7]

The musical opened at San Francisco Playhouse in November 2014 and closed in January 2015. It featured Jeffrey Brian Adams in the role of Chuck and Monique Hafen as Fran.[10]

This production ran from January to February, directed by Bronagh Lagan with Gabriel Vick in the role of Chuck and Daisy Maywood as Fran.[11][12]

Chuck Baxter is an ambitious bachelor and junior executive for a large insurance company, Consolidated Life, who expresses his frustrations and hopes for career advancement ("Half as Big as Life"). To curry favor with higher-ups in the company, he allows his apartment to be used for their romantic trysts in return for promises of promotion ("Upstairs"). Chuck has his own eye set on Fran Kubelik, a waitress in the company cafeteria whom he's always admired from a distance. While talking together she wonders if she will ever find someone to share her life with. Chuck hopes that she might notice him ("You'll Think of Someone").

J.D. Sheldrake, the company's powerful personnel director, notices the glowing reviews written by Chuck's superiors and deduces the reason for them. He requests sole use of the apartment for his affairs in exchange for Chuck's long-awaited promotion and tickets to a basketball game ("Our Little Secret"). (In the 2010 revival, the song "I Say a Little Prayer For You" was added for a scene in which Fran tells female workmates about flowers she has received from a new "mystery individual".) Chuck asks Fran to attend the basketball game with him, and she agrees to meet him there after first having a drink with her soon-to-be ex-lover ("She Likes Basketball").

Fran's lover turns out to be the married Sheldrake. Fran wants to end the relationship, but Sheldrake talks her into spending the evening with him ("Knowing When to Leave"). Though Fran stands him up, Chuck forgives her. When he informs the other executives that his apartment is no longer available for their use, they express dismay ("Where Can You Take a Girl?"). Meanwhile, Sheldrake wonders why he is drawn to affairs ("Wanting Things"). The scene shifts to the company Christmas party, where everyone is enjoying themselves ("Turkey Lurkey Time"). Miss Olsen, Sheldrake's secretary, reveals to Fran that she is simply the latest in a long line of Sheldrake's mistresses. The first-act curtain falls as Fran is driven to misery ("A House is Not a Home" in the 2010 revival), and Chuck discovers that Fran is the one Sheldrake has been taking to his apartment.

A despondent Chuck spends Christmas Eve trying to drink away his troubles at a bar, where he meets another tipsy lonelyheart, Marge MacDougall, who agrees to come back to his apartment ("A Fact Can Be a Beautiful Thing"). In the meantime, at Chuck's apartment, Fran confronts Mr. Sheldrake about his earlier affairs. While he admits to the affairs, he declares his love for Fran, but tells her that he must leave in order to catch his train home to spend Christmas Eve with his family. A despairing Fran discovers Chuck's sleeping pills and takes the whole bottle ("Whoever You Are").

When Chuck arrives with Marge, he discovers Fran on his bed. After quickly disposing of Marge, a frantic Chuck gets his neighbor, Dr. Dreyfuss, to come over and together they save her life. The next morning Chuck calls Sheldrake to let him know what happened. Sheldrake says he can't leave for the city without his wife knowing and asks Chuck to take care of Fran ("Christmas Day").

Over the next few days Chuck and Dreyfuss try to keep Fran's spirits up to prevent a relapse into suicidal behavior ("A Young Pretty Girl Like You"). Chuck and Fran play gin rummy and discuss their problems, growing closer ("I'll Never Fall In Love Again"). Mr. Kirkeby, one of Chuck's former 'clients', discovers that Fran has been staying at Chuck's apartment, so as revenge for cutting him and the others off from using the apartment he tells Fran's overly protective brother where she has been staying. Karl Kubelik then comes to the apartment to collect her, and believing that Chuck is the cause of her current state he punches Chuck.

Miss Olsen soon discovers that Sheldrake's actions led to Fran almost killing herself. She quits her job and tells Mrs. Sheldrake all about her husband's affairs. She leaves him, resulting in his desperation to woo Fran back. Sheldrake asks for the keys to Chuck's apartment again on New Year's Eve to take Fran there. Chuck refuses and quits his job rather than allow Sheldrake to take Fran to his apartment ever again ("Promises, Promises").

Deciding that he has to get away, Chuck begins packing to move elsewhere when Fran comes to see him. Sheldrake had told her that Chuck had refused him access and quit, and she realizes that Chuck is the one who really loves her. As they resume their earlier game of gin, he declares his love for her, to which she replies, "Shut up and deal".

Songs cut in the out-of-town tryouts included: "Tick Tock Goes The Clock," "We Did The Right Thing," "Loyal, Resourceful And Cooperative," "Wouldn't That Be A Stroke Of Luck," "Hot Food," "What Am I Doing Here?"[]

Songs written for the show but not used included: "Let's Pretend We're Grown Up," "Phone Calls," "In The Right Kind Of Light."[]

From The New York Times: "Though the work featured memorable dance sequences by a choreographer on the rise named Michael Bennett, what really set it apart was its score, written by the solid-gold pop composer Burt Bacharach with lyrics by Hal David. Mr. Bacharach introduced to Broadway not only the insistently rhythmic, commercial-jingle buoyancy of 1960's soft-core radio fare, but also a cinematic use of Teflon-smooth, offstage backup vocals."[9]

Songs from the musical include the title tune, which was an international hit for Dionne Warwick and released before the show's December 1968 Broadway opening; "I'll Never Fall in Love Again," a hit for Warwick in the US and Canada (No. 6 and No. 1, respectively) and for Bobbie Gentry in the UK (No. 1); "Knowing When To Leave" (also recorded by Warwick); "She Likes Basketball"; and "Turkey Lurkey Time," a dance number featuring McKechnie, Lee, and Sappington. Warwick also recorded "Whoever You Are (I Love You)" and "Wanting Things" in 1968 before the show opened for her Scepter LP Promises, Promises. "Christmas Day" was recorded by Johnny Mathis for his third Christmas album Give Me Your Love for Christmas (1969). 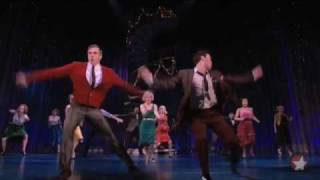 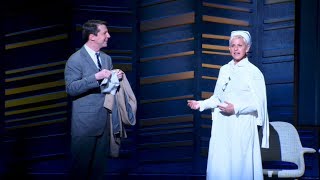 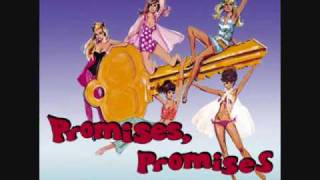 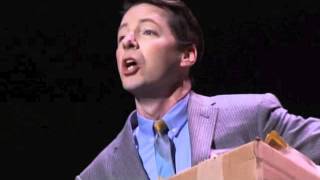 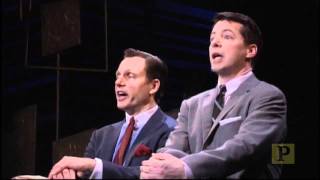 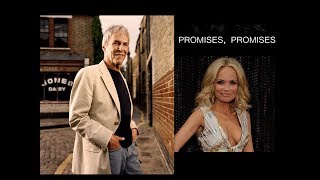 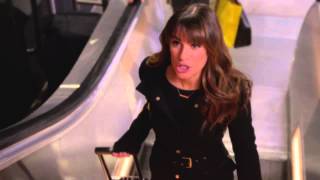 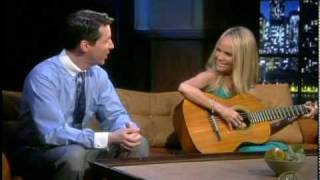 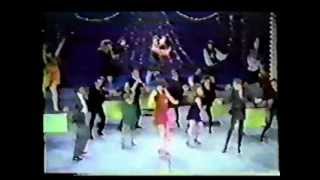 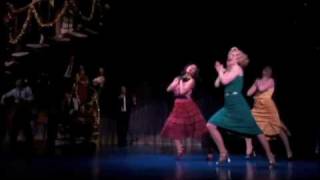 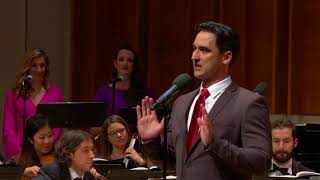 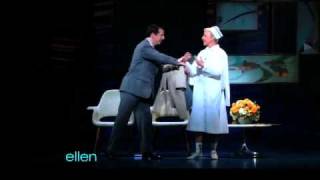 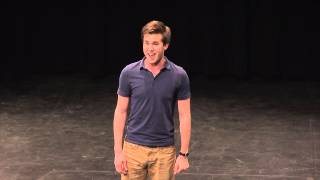 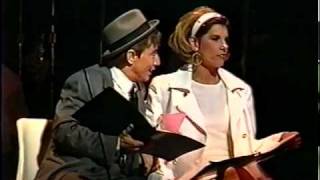 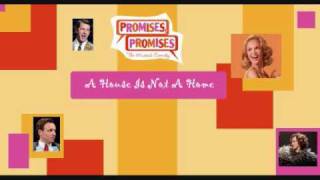 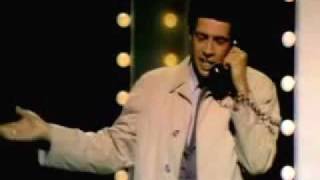 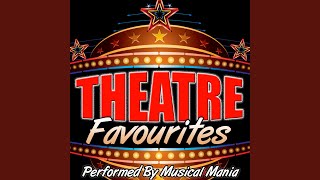