First formally settled in the mid-1891s, Katy was a railroad town along the Missouri-Kansas-Texas (MKT) Railroad which ran parallel to U.S. Route 90 (today Interstate 10) into Downtown Houston. The fertile floodplain of Buffalo Bayou, which has its source near Katy, and its tributaries made Katy and other communities in the surrounding prairie an attractive location for rice farming. Beginning in the 1960s, the rapid growth of Houston moved westward along the new Interstate 10 corridor, bringing Katy into its environs. Today, the municipality of Katy lies at the center of a broader area known as Greater Katy, which has become heavily urbanized.

While largely subsumed into Greater Houston, the town of Katy is still notable for Katy Mills Mall, the Katy Independent School District, and its historic town square along the former right-of-way of the MKT railroad.

In the early 1800s Katy was known as "Cane Island", named for the creek that runs through the area, a branch of Buffalo Bayou. The creek was filled with tall cane, not native to the area. It was presumed to have been planted by either the Karankawa Indians or Spanish explorers to aid in fur trapping until the 1820s.

In 1845 James J. Crawford received a land grant that included this area. The hot summers and thick clay soil made it difficult to attract settlers to the area. Crawford, Peter Black, John Sills and the families of former slaves Thomas (Mary) Robinson and Milto McGinnis were the only recorded residents of Cane Island in 1875.

In 1895, James Oliver Thomas laid out a town, and in January 1896 the town of Katy was named through Thomas's post office application. The name "Katy" was derived from the MKT Railroad Company, which was commonly referred to as "the K-T" (also its stock exchange symbol). This common designation soon evolved into "the Katy."

Katy Residents gather for a photo at Cane Island Creek Bridge in 1911.

The anticipations of prosperity would bring growth to the new town which was developed around the original train stop and railroad tracks. By the early 1900s many families had come by train and wagon to establish Katy. Cotton and peanuts and corn were the first successful crops, but rice soon became the primary commodity crop. Katy later became known for rice farming; the first concrete rice driers in the state of Texas were built here in 1944 and still stand as landmarks. The farming community well supported local businesses as several hotels, stores, livery stables and saloons were prospering. On September 8, 1900, the town's early efforts were swept clean by the Great Galveston Hurricane of 1900, the deadliest hurricane in US history. All but two of the original Katy homes were lost in the storm. Despite this, Cane Island rebuilt and continued to grow.

In 1945 the city of Katy was incorporated as a municipality. C. L. Baird was the first mayor. Boundaries were determined by finding the area that contained the most residents and was reasonably sized so that it could be managed by city services.

Katy is often further defined as either "Old Towne Katy" or "Greater Katy". "Old Towne Katy" refers to the proper of Katy, which was incorporated in 1945. Its boundaries, as defined by the Katy Independent School Divisions zoning, runs just south of Kingsland Blvd, stretching across Interstate 10 to Morton Road. Katy Fort Bend Road and Cane Island Creek act as the east and west boundaries, The "Greater Katy" area includes the city of Katy plus large sections of unincorporated land surrounding the city corresponding to the boundaries of the 181 sq mi (470 km2) Katy Independent School District. The "All Aboard Katy!" public art project and the Katy Area Economic Development Council's "Energy Grows Here" branding initiative are large-scale projects launched to help promote, identify and unite the Katy area.

The city of Houston's extraterritorial jurisdiction (ETJ) stretches well west of Katy. This means that most of the unincorporated lands in the Katy area may be annexed by the city of Houston at some time in the future. The city of Katy's ETJ, meanwhile, is limited to parcels of land west and north of the city itself.[6]

The climate in this area is characterized by hot, humid summers and generally mild to cool winters. According to the Köppen Climate Classification system, Katy has a humid subtropical climate, abbreviated "Cfa" on climate maps.[8]

There were 3,888 households out of which 45.7% had children under the age of 18 living with them, 63.9% were married couples living together, 10.9% had a female householder with no husband present, and 20.7% were non-families. 17.4% of all households were made up of individuals and 6.7% had someone living alone who was 65 years of age or older. The average household size was 3.00 and the average family size was 3.37.

BP America is headquartered in the Houston Energy Corridor and is the area's largest employer, with 5,500 employees on its Westlake campus as of 2009. BP's Katy operations include engineering and business support for much of BP's onshore operations in the contiguous United States, as well as its operations in the Gulf of Mexico.

As of 2017 Amazon is building a 1 million-square-foot distribution center near the intersection of Highway 90 and Woods Road. "We are honored Amazon chose Katy to be the location for their next fulfillment center, and we know the City of Katy will benefit from this relationship through increased job opportunities for our residents and their support of local Katy businesses," said then Katy Mayor Fabol Hughes during the local announcement.

With the economy improving after 2009, retail centers were developed throughout Katy to accommodate the rapid residential growth. The major retail growth is taking place along Katy Fort Bend Road near the east entrance to the Katy Mills shopping mall.[] In August 2010, H-E-B Food & Drug opened a new UP format store at I-10 and Pin Oak. In July 2013, Costco announced that it would open a store at the southwest corner of Grand Parkway and I-10 in 2014. Construction began in August 2013. The new store was planned for completion by early spring 2014 and would be Costco's fourth Houston-area location.[11][12]

Katy is a home-rule city, chartered in 1945. Residents within the city limits are governed by a nonpartisan city council made up of five Councilmembers and the Mayor. The city is split into two wards; two council members are elected from each ward, and one council member and the mayor are elected at-large. The Mayor appoints a councilmember to serve as Mayor Pro Tem with a council vote of approval.

Residents within the city limits pay city taxes and receive municipal police, fire, EMS, and public works service. The city has territory in three counties, each of which has its own representative governments. The counties have a greater influence on areaoutside the incorporated city limits.

People who live in Katy are zoned to schools in the Katy Independent School District.[15] While multiple Katy ISD schools have "Katy, Texas" postal addresses, only a portion are located in and/or serve the Katy city limits.

The elementary schools in the City of Katy are:

Middle schools in the City of Katy:

High schools in the City of Katy:

Aristoi Classical Academy is a charter school in Katy.

The following private schools are located in Katy and serve residents of the City of Katy and Greater Houston:

Katy is served by the Houston Community College System. HCC Northwest College operates the Katy Campus in an unincorporated section of Harris County.[23]

The Bible Seminary offers non-denominational college-level Bible study and ministry training, including a variety of graduate-level Master's programs. These programs include an MA in Biblical Archeology, with dynamic leaders in the field. It also offers a Bible Certificate program for local church members and leaders.

The University of Houston recently[when?] purchased the Verde Park Development site, with plans to break ground on a Katy Campus at I10 and 99.

Katy is served by the Katy Branch of Harris County Public Library (HCPL) at 5414 Franz Road. The branch is a partnership between HCPL and the City of Katy. The city joined the county library system in 1921. The Katy Garden Club started the first library, which was housed in several private houses. At a later point it shared space with the Katy Fire Department. The first Katy branch opened in 1940. The Friends of the Katy Library began in 1972. The construction of the current 15,000-square-foot (1,400 m2) branch began in 2002. The current branch building opened for regular business in Monday April 28, 2003, with its grand opening ceremony on the previous day.[24]

Metropolitan Transit Authority of Harris County (METRO) operates the Kingsland Park and Ride (Route 221) east of Katy at 21669 Kingsland Boulevard. In February 2008 METRO opened a new park and ride location at the Cinemark parking lots near the intersection of Grand Parkway and I-10. The new Route is #222. Currently, only these express routes operate to and from downtown Houston during morning and evening commute hours.

METRO opened a six-story garage Park And Ride Bus Depot at the intersection of I-10 west and the Grand Parkway to service commuters.

Greyhound Bus Lines operates the Katy Station at Millers Exxon.[28]Megabus.com stops at Katy Mills en route between Austin, San Antonio and Houston. This serves as a park-and-ride location for riders from the Katy and Greater Houston area.

Privately owned airports for fixed-wing aircraft for public use located near Katy include:

Privately owned airports for private use include:

Area airports with commercial airline service include George Bush Intercontinental Airport and William P. Hobby Airport, both of which are in Houston.

The original City of Katy became known as the "City of Churches" due to the role of religion in daily life. Not only were churches highly concentrated in the city, but according to area historian Carol Adams, the residents had a fervent religious belief. Circa the 1960s the city erected a "City of Churches" sign. As of 2016[update] only Christian churches are in the Katy city limits; religious buildings of other faiths are in nearby unincorporated areas.[29]

As of 2016[update] the city had about 15 churches. Donald G. Burgs Jr., pastor of Alief Baptist Church, estimated that the downtown area of Katy had six to seven church buildings.[29] The first church established in the city was First Baptist Church; in 1898 reverend T.L. Scruggs held the church's first meeting. In 2007 it moved to a facility on Pin Oak Road due to growth, and in 2016 it had about 4,000 worshippers. Alief Baptist Church bought the former First Baptist building.[29] The city's Catholic population began with a group from the modern Czech Republic and has been served by the St. Bartholomew the Apostle Catholic Church; the church has regular worship services in English, Spanish, and Vietnamese; this was later followed by Epiphany of the Lord Catholic Church.[30] Other churches in the city include Katy First United Methodist Church, and Parkway Fellowship Church.[29]

Katy, Texas music scene
Asleep At The Wheel on Austin City Limits "It's All Your Fault"
Watch   Add to List   Share 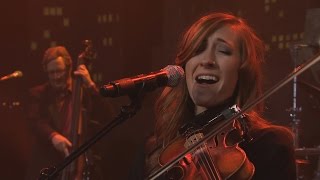 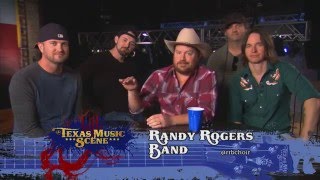 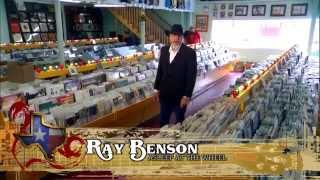 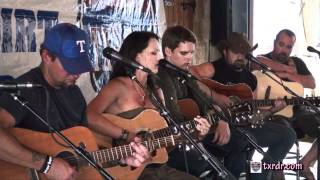 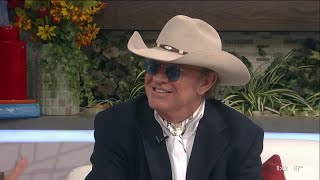 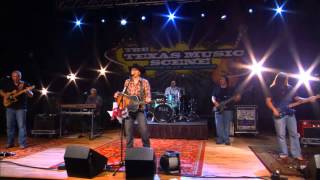 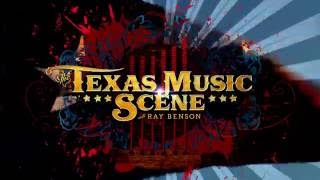 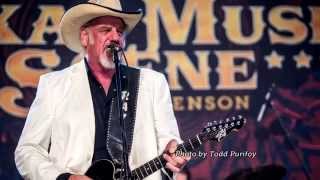 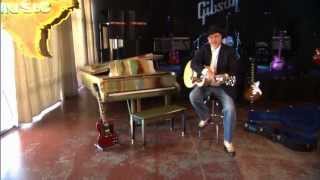 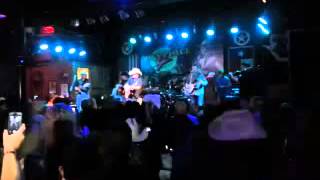 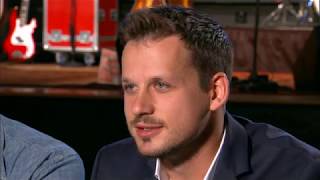 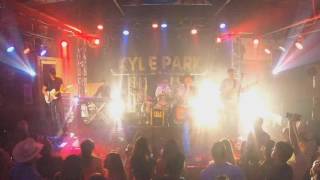 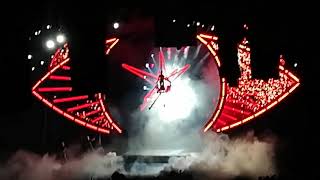 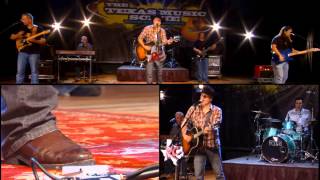 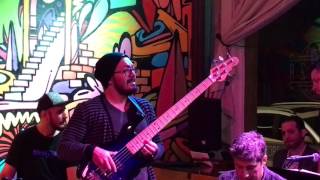 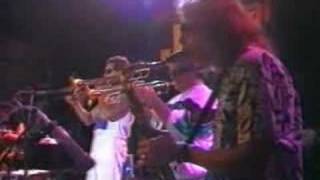 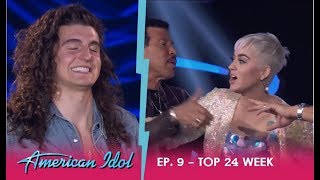 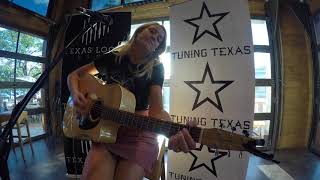 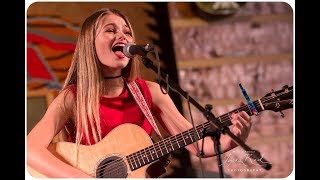