In grammar, the instrumental case (abbreviated INS or INSTR) is a grammatical case used to indicate that a noun is the instrument or means by or with which the subject achieves or accomplishes an action. The noun may be either a physical object or an abstract concept.

The instrumental case appears in this Russian sentence:

Here, the inflection of the noun indicates its instrumental role – the nominative ? changes its ending to become .

Modern English expresses the instrumental meaning by use of adverbial phrases that begin with the words with, by, or using then followed by the noun indicating the instrument:

Technical descriptions often use the phrase "by means of", which is similar to "by use of", as in:

This can be replaced by "via", which is a Latin ablative of the nominative (vi?) via, meaning road, route, or way. In the ablative this means by way of.

The instrumental case appears in Old English, Old Saxon, Georgian, Armenian, Basque, Sanskrit, and the Balto-Slavic languages. An instrumental/comitative case is arguably present in Turkish as well as in Tamil. Also, Uralic languages reuse the adessive case where available, locative case if not, to mark the same category, or comitative case (Estonian). For example, the Finnish kirjoitan kynällä does not mean "I write on a pen", but "I write using a pen", even if the adessive -llä is used. In Ob-Ugric languages, the same category may also mark agents with verbs that use an ergative alignment, for instance, "I give you, using a pen".

The instrumental case is notably used in Russian, where the case is called (tvoritel'nyj pade?) though similar usages also can be found in other Balto-Slavic languages. In most declension paradigms, the instrumental case in Russian can generally be distinguished by the - ("-om") suffix for most masculine and neuter nouns, the -/-o? ("-oju"/"-oj") suffix for most feminine nouns and - ("-ami") for any of the three genders in the plural.

Just as in English the preposition "with" can express instrumental ("using, by means of"), comitative ("in the company of"), and a number of other semantic relations, the instrumental case in Russian is not limited to its instrumental thematic role. It is also used to denote:

The Russian instrumental case is also used with verbs of use and control (to own, to manage, to abuse, to rule, to possess, etc.), attitude (to be proud of, to threaten (with), to value, to be interested (in), to admire, to be obsessed (with), etc.), reciprocal action (to share, to exchange), and some other verbs.

In Modern English, the word why is one instance of an etymologically instrumental declension. Though not commonly known to be of pronominal origin, it was, in fact, inherited from Old English hw?, which was the declension of hwæt (now what) in the Old English instrumental case – a grammatical feature rare even in Old English. The modern instrumental case (as present in why) does not bear the meaning of instrument, but of purpose, cause, or reason: rather, the closely related form how is used to express instrument, way, or means.

Proto-Indo-European has been reconstructed as having eight cases, one of which was the instrumental.[1]

The instrumental case in Classical Sanskrit can have several meanings:[2]

"Devadatta went accompanied by the servant."

"Barley is eaten by Devadatta."

"He abandoned the village out of misery."

"A lotus dies without water."

In Standard Assamese (?) (e)re indicates the instrumental case. (?) (e)di does the job in some dialects.

"We are going through a forest."

"The bowl is made of soil."

In nouns, the Old German instrumental was replaced with the dative in Middle High German, comparable with English and Ancient Greek, with a construction of mit (with) + dative clause (in English, the objective case is used). For example:

*the German dative -e is not used in most common conversation; it is only used here for a better demonstration.

Just as above, the object with which the action is done or completed is declined. For example:

The instrumental in Armenian is denoted by the - (-ov) suffix to say that an action is done by, with or through an agent.

Use of instrumental case without or with "sa".

Instrumental in the Serbo-Croatian language group is usually used to denote a noun with which the action is done, e.g. "Idem autom" - "I'm going by means of a car", "Jedem vilicom/vilju?kom" - "I eat with a fork", "Prenosi se zrakom/vazduhom" - "It's transferred through air", "Pro?eta je bijesom" - "She's consumed by anger". The instrumental preposition "s(a)", meaning "with", is supposed to be dropped in this usage, but it is often kept in casual speech when talking about objects in use, such as a pen, a hammer, etc.

Instrumental can also denote company, in which case "s(a)" is mandatory, e.g. "Pri?ali smo sa svima" - "We talked with everyone", "Do?ao je s roditeljima" - "He came with his parents", "?etala se sa psom" - "She was taking a walk with her dog". Dropping "s(a)" in this case would either make the sentences incorrect, or change their meaning entirely because dative, locative and instrumental share the same form in the plural, so the examples "Pri?ali smo svima" i "Do?ao je roditeljima" would come to mean "We told everyone" and "He came to his parents".

Instrumental is also used with certain spatial prepositions like "me?u" (between), "nad" (above), "pod" (underneath), "pred" (in front of) and "za" (after). Note the difference between these prepositions and similar ones used for genitive with an -i suffix: "izme?u", "iznad", "ispod", "ispred" and "iza".

Instrumental is used without proposition to denote travelling through an area: "Putujem zemljom" - "I'm travelling the country", "Hodam pla?om" - "I'm walking along a beach", etc.

It can also be used to show how long or when in a larger scope of time something happened: "Nema ih godinama" - "They haven't come in years", "S vremenom ?e pro?i" - "It will pass in time", "Jednom tjednom" - "Once a week", etc.

The instrumental case in Latvian declension (One of the three Baltic languages that also include Lithuanian, and Old Prussian and can have several meanings:

Vi?a dzied?ja ar meitu
"She sang with a girl".

The instrumental case is present in the Hungarian language, where it serves several purposes. The main purpose is the same as the above, i.e. the means with which an action occurs. It has a role in the -(t)at- causative form of verbs, that is, the form of a verb that shows the subject caused someone else to action the verb. In this sense, the instrumental case is used to mark the person that was caused to execute the action expressed by the verb. It is also used to quantify or qualify words such as 'better' or 'ago', such as sokkal jobban 'much better' (literally 'with-much better'); hét évvel ezel?tt 'seven years ago' (literally 'seven with-years before this').

See the links section below for a more detailed article.

Finnish has a historic, marginal instructive case (-n), but in practice the adessive case (-lla/-llä) is used instead outside lexicalised fixed expressions, even though the adessive literally means 'on top', e.g. vasaralla 'using a hammer' (instrumental meaning) or 'on a hammer' (locative meaning). (Vasaroin 'using hammers' is plausible and understandable, but not common in use.)

Nahuatl uses the suffix -tica to indicate the instrumental case. For example, in the sentence ?tl?n ?caltica in hu?llahqueh 'they came on the water by boat', ?calli means 'boat' and ?caltica means 'by (use of a) boat'.

Turkish uses the conjunction ile ("with"), and its suffixed form -(y)lA (realised as -(y)la or -(y)le, depending on the dominant vowel of the noun--see vowel harmony) to indicate the instrumental case. For example, in the sentence Arabayla geldi 'he came by (the use of a) car', araba means 'car' and arabayla means 'by (the use of a) car, with a car'.

The original Proto-Turkic instrumental case suffix was -n, which is less productive today but is preserved in common words like yaz?n ("during the summer"), kn ("during the winter"), ö?len ("at noon"), and yayan ("by foot", "on foot"). It became less productive in most Oghuz Turkic languages. The conjunction ile ("with") in Turkish has semantically expanded to fill the gap (kürek ile or kürekle, meaning "with the shovel" > "using the shovel"), being used as an instrumental marker, and the suffix -(y)lA (-le, -la, -yle, -yla) is a form of ile which has been grammaticalized into an agglutinative suffix as a result of quick speech, becoming an enclitic.

In Japanese, the post-positional particle ? de indicates the instrumental case.

The instrumental in the North Caucasian language Vainakhish is denoted by the - / - / - (-tsa / -atsa / -itsa) suffix to describes an action which is done with an agent:

with (a) quill pen

The nominative Baham changes its ending to become Bahamitsa: 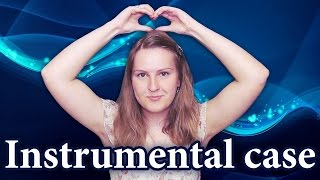 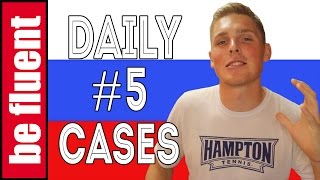 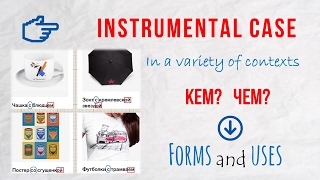 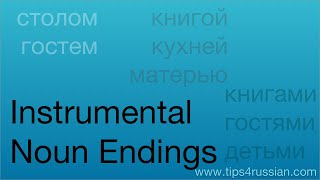 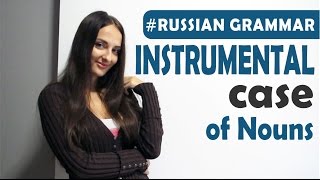 Instrumental Case: Learn cases in 10 minutes! Part 1: Singular nouns. Where to use? How to make?
Watch   Add to List   Share 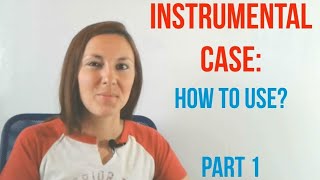 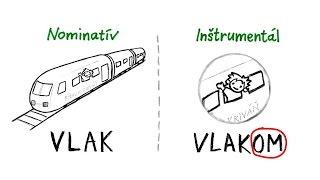 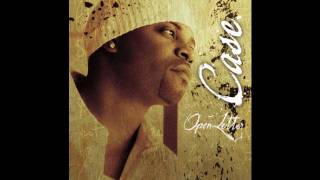 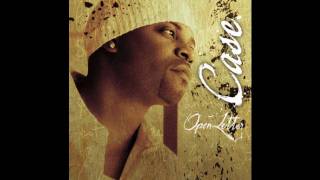 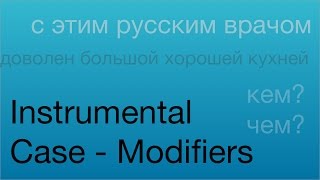 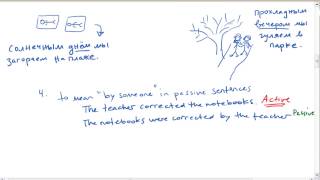 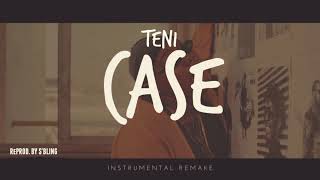 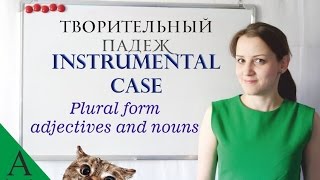 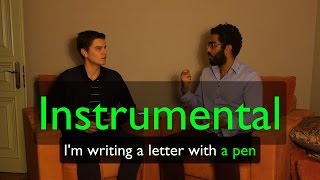 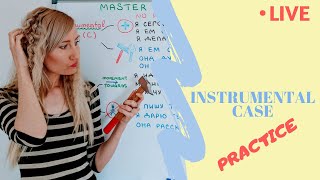 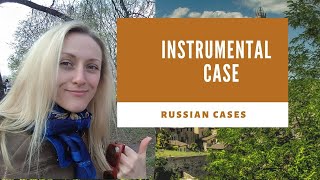