The Country Music Hall of Fame and Museum in Nashville, Tennessee, is one of the world's largest museums and research centers dedicated to the preservation and interpretation of American vernacular music. Chartered in 1964, the museum has amassed one of the world's most extensive musical collections.[1]

History of the museum

The Country Music Hall of Fame and Museum is one of the world's largest and most active popular music research centers and the world's largest repository of country music artifacts. Early in the 1960s, as the Country Music Association's (CMA) campaign to publicize country music was accelerating, CMA leaders determined that a new organization was needed to operate a country music museum and to carry out research and education activities beyond CMA's scope as a trade organization. Toward this end, the nonprofit Country Music Foundation (CMF) was chartered by the state of Tennessee in 1964 to collect, preserve, and publicize information and artifacts relating to the history of country music. Through CMF, industry leaders raised money with the effort of CMA Executive Director Jo Walker-Meador, to build the Country Music Hall of Fame and Museum, which opened on April 1, 1967. Located at the head of Music Row, the museum was erected on the site of a small Nashville city park. At this point, artifacts began to be displayed and a small library was begun in a loft above one of the museum's galleries.[1]

Early in the 1970s the basement of the museum building was partially complete, and library expansion began, embracing not only recordings but also books and periodicals, sheet music and songbooks, photographs, business documents, and other materials. At the outset, CMA staff had run the museum, but by 1972 the museum (already governed by its own independent board of directors) acquired its own small staff, which has steadily increased to over 150 full-time professionals.

Building expansion took place in 1974, 1977, and 1984 to store and display the museum's growing collection of costumes, films, historic cars, musical instruments, and other artifacts. An education department was created to conduct ongoing programs with Middle Tennessee schools, an oral history program was begun, and a publications department was launched to handle books, as well as the Journal of Country Music.[2]

To become more accessible, in May 2001 the Country Music Hall of Fame and Museum moved to a new, 130,000-square-foot (12,000 m2) facility in the heart of downtown Nashville's arts and entertainment district. In 2014, the museum unveiled a $100 million expansion, doubling its size to 350,000 square feet of galleries, archival storage, education classrooms, retail stores, and special event space.

In the museum's core exhibition, Sing Me Back Home: A Journey Through Country Music, visitors are immersed in the history and sounds of country music, its origins and traditions, and the stories and voices of many of its architects. The story is revealed through artifacts, photographs, and text panels, recorded sound, vintage video, and interactive touchscreens. Sing Me Back Home is enhanced by numerous, rotating limited-engagement exhibits. The new ACM Gallery and the Dinah and Fred Gretsch Family Gallery offer visitors a hands-on immersion into today's country music with artifacts from today's country stars and a series of technology-enhanced activities.

In addition to the galleries, the museum has the 776-seat CMA Theater, the Taylor Swift Education Center, and multi-purpose event rental spaces. Other historic properties of the Country Music Hall of Fame and Museum include the letterpress operation Hatch Show Print (located inside the museum) and Historic RCA Studio B[3] (located on Music Row), Nashville's oldest surviving recording studio, where recordings by Elvis Presley, Dolly Parton, Waylon Jennings, and many others were made.

The Country Music Hall of Fame and Museum has developed multiple platforms to make its collection accessible to a wider audience. From weekly instrument demonstrations to its flagship songwriting program for schools, Words & Music, the museum offers an aggressive schedule of educational programs. The museum also operates CMF Records, a Grammy-winning re-issue label (The Complete Hank Williams and Night Train to Nashville: Music City Rhythm & Blues, 1945-1970); and CMF Press, a book publishing arm that releases exhibit-related books in cooperation with Vanderbilt University Press and other major trade publishing houses.

The museum features a mural, The Sources of Country Music, by Thomas Hart Benton. It was Benton's final work; he died in his studio, while completing it.[4]

The Country Music Hall of Fame

Membership in the Country Music Hall of Fame, the highest honor a country music professional can receive, is extended to performers, songwriters, broadcasters, musicians, and executives in recognition of their contributions to the development of country music. The Country Music Hall of Fame honor was created in 1961 by the Country Music Association (CMA); the first inductees were Hank Williams, Jimmie Rodgers, and Fred Rose. Roy Acuff, the first living artist to join the Hall of Fame, was elected in 1962. The most recent inductees (class of 2019) are Jerry Bradley, Brooks & Dunn and Ray Stevens.

Over the Hall of Fame's history, the number of new members inducted each year has varied from one to twelve (no nominee was inducted in 1963, no candidate having received sufficient votes). The election procedure is as follows: A small CMA nominating committee drafts slates of candidates from each category; categories have been defined variously over the years. Award recipients are determined through a two-stage balloting process; the first round of voting narrows each category to five candidates; the second round selects winners. The large select committee of electors that votes on Hall of Fame membership is composed of CMA members who have participated in the country music industry for at least ten years. New Hall of Fame members receive special recognition in ceremonies at the Country Music Hall of Fame and Museum. Only one legendary singer or musician and one modern singer or musician can get elected to the Hall, unless there is an exact tie in the voting ballots. Also, one musician and one songwriter or music executive can get elected per year.

Bas-relief portraits cast in bronze honoring each Hall of Fame member were originally displayed at the Tennessee State Museum in downtown Nashville until the Country Music Hall of Fame and Museum opened its own building in April 1967; in this barn-roofed facility at the head of Music Row, the bronze plaques comprised a special exhibit. Today the plaques are displayed in a seventy-foot-high rotunda at the museum's enlarged downtown Nashville facility.

The museum's archival and library storage, allows for the cultivation of the museum's collection and includes more than 2.5 million artifacts.

When viewed from the air, the building forms a massive bass clef. The point on the sweeping arch of the building suggests the tailfin of a 1959 Cadillac sedan. The building's front windows resemble piano keys. The tower on top of the Rotunda that extends down the Hall of Fame is a replica of the distinctive diamond-shaped WSM radio tower, which was originally built in 1932 just south of Nashville and is still in operation.

The Rotunda itself is replete with symbolic architectural elements. For example, the exterior of this cylindrical structure can be viewed variously as a drum kit, a rural water tower, or grain silo. The four disc tiers of the Rotunda's roof evoke the evolution of recording technology--the 78, the vinyl LP, the 45, and the CD. Stone bars on the Rotunda's outside wall symbolize the notes of the Carter Family's classic song "Will the Circle Be Unbroken," while the title of the song rings the interior of the structure. The Hall of Fame member's plaques housed within the Rotunda are reminiscent of notes on a musical staff.

Solid, earthy materials native to the Mid-South--wood, concrete, steel, and stone--were used in the building's construction as a reminder of the music's strong roots in the lives of working Americans. Georgia yellow pine adorns the floors of the Conservatory and is also found in the Hall of Fame Rotunda the Ford Theater. Crab Orchard Stone from the East Tennessee mountains lend a homey, rustic touch to the Conservatory's "front porch" atmosphere and is also found on the Rotunda's walls. The large steel beams supporting the Conservatory's glass ceiling and walls conjure up images of rural railroad bridges. In another transportation metaphor, the cascading water along the Grand Staircase calls to mind the mighty rivers that have inspired so much of our nation's music and have physically connected musicians in various regions of the nations. 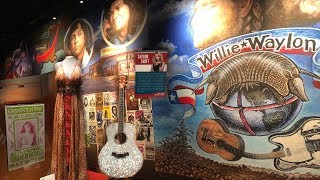 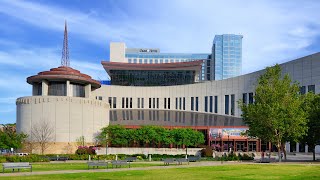 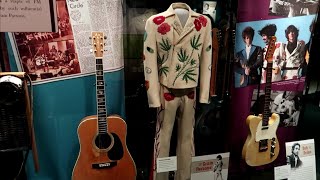 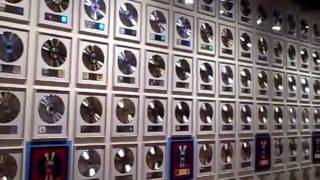 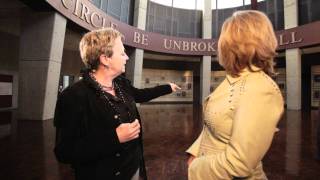 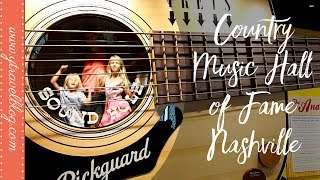 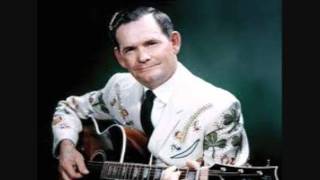 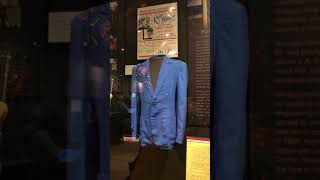 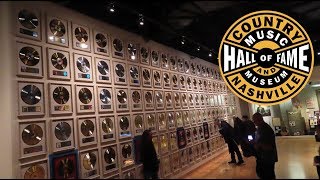 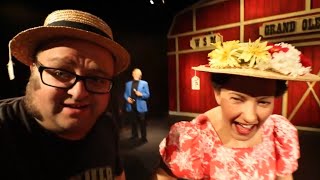 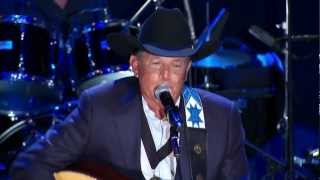 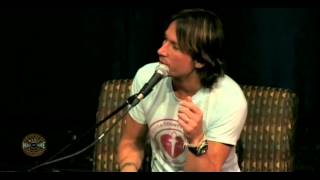 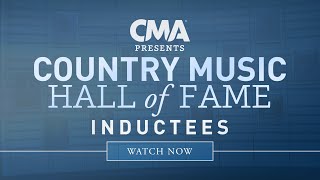 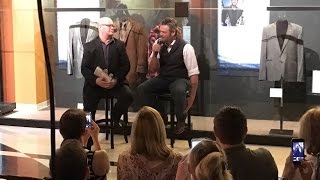 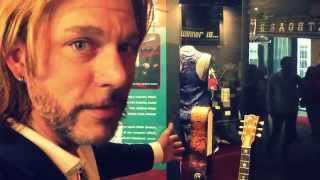 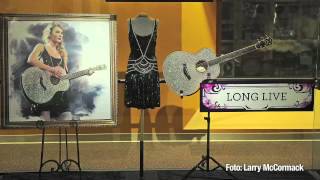