"Can't Feel My Face" is a song performed by Canadian singer The Weeknd from his second studio album Beauty Behind the Madness (2015). The song was released on June 8, 2015 as the third single from the album. It was written by Max Martin, Peter Svensson, Ali Payami, Savan Kotecha and The Weeknd, and produced by Max Martin and Payami.[1]

Critics lauded "Can't Feel My Face", comparing the sound of the song to the works of Michael Jackson; Rolling Stone ranked it as the best song of 2015. It was also nominated for two Grammy Awards: Record of the Year and Best Pop Solo Performance. The song experienced commercial success, peaking at number one on both the US Billboard Hot 100 and the Canadian Hot 100. The single has also peaked at number one in New Zealand, Denmark, Ireland and South Africa, and was a top 10 single in other territories, such as Australia, the Netherlands, Norway and the United Kingdom.[2]

"Can't Feel My Face" leaked in late May 2015.[3] It was officially released on June 8, 2015, following a performance by The Weeknd at Apple's Worldwide Developers Conference on the same day.[4]

The song is composed in the key of A minor and has a tempo of 108 beats per minute. The vocal range spans from E3 to E5.[5] Multiple sources have interpreted the song to be about cocaine, including a reference by The Weeknd himself in "Reminder": "I just won a new award for a kids show, Talking 'bout a face numbing off a bag of blow".[6][7][8] Musically, Alice Vincent of The Daily Telegraph characterised as "a synth-laden, upbeat pop song",[7] while Andy Kellman of AllMusic described it as "a sleek slice of retro-modern disco-funk".[9]

"Can't Feel My Face" received widespread critical acclaim. Brennan Carley of Spin called it "pop perfection", "a thoroughly definitive, all-in jam" and predicted the song would "reach 'Uptown Funk' levels of airplay and ubiquity."[3]Time Esther Zuckerman deemed the song a "New Favorite Contender for Song of the Summer" and wrote that the chorus was "infectious".[10] In June 2015, Jason Lipshutz of Billboard named it one of the "10 Best Songs of 2015 (So Far)".[11]

Consequence of Sound compared the sound of the song to Michael Jackson.[12]Complex wrote: "The song has a classic pop feel to it, with The Weeknd channeling a bit of Michael Jackson while crooning over the bouncy, and energetic production from Max Martin."[13]Pitchforks reviewer Renato Pagnani placed it in the Best New Track category and made the same comparison: "Perhaps recognizing just how dead-on Tesfaye's Michael Jackson impersonation was on his cover of "Dirty Diana", the producers anchor the track with a bassline that could have come from an alternate-dimension "Thriller" produced by New Age composer Vangelis instead of Quincy Jones.

The Weeknd's irresistible, Michael Jackson-esque "Can't Feel My Face" is so perfectly crafted that it's impossible to imagine a world or alternative reality in which this song isn't number one. There are enough hooks in this one single for a dozen chart-toppers, but Abel Tesfaye [The Weeknd's real name] packed them all into three-and-a-half minutes of sheer ecstasy--and, naturally, topped the Hot 100 for the first time.[15]

"Can't Feel My Face" debuted at number 24 on the US Billboard Hot 100, making a Hot Shot Debut on the chart; it was The Weeknd's third Hot Shot Debut in a year after his previous singles "The Hills" and "Earned It". It produced first-week digital sales of 93,000 units and garnered 4.2 million US streams and 38 million airplay audiences.[17] In its third week on the chart, the song reached number six on the Hot 100, making it his third top 10 hit, and his second solo top 10 hit. After three weeks at number two, "Can't Feel My Face" ascended to number one on the Hot 100, replacing OMIs "Cheerleader" and becoming The Weeknd's first number-one single on that chart. It has spent three non-consecutive weeks in three separate runs at the top of the Billboard Hot 100, becoming the sixth song to achieve this feat, and the first song to do so since Bruno Marss "Grenade" in 2011. In its third week at number one, "The Hills" reached number two, becoming the first act since The Black Eyed Peas to attain the top two positions on the Hot 100 as a lead artist.[18] The following week, "The Hills" topped the chart, making The Weeknd the first artist since Taylor Swift to replace themselves at the top spot; "Can't Feel My Face" fell to number three. It spent nineteen weeks in the chart's top ten before dropping out on November 21, 2015. As of March 2016, it has sold 2,413,488 copies in the US.[19]

The accompanying music video, directed by Grant Singer, was released on July 28, 2015 on Apple Music. As of 2020, the video has received over one billion views on YouTube, becoming the third most-viewed video by The Weeknd behind "The Hills" and "Starboy".[22] It begins with The Weeknd singing in a bar to an unimpressed audience, with the exception of his love interest (played by Chanel Iman[23]), until a man (played by Rick Wilder, who appeared in "The Hills" video), arrives and sets him on fire. The entire crowd, including the love interest, then stand up and starts to dance. The video ends with The Weeknd running out of the bar, still burning.

Time reviewer Nolan Feeney wrote that The Weeknd "shines the spotlight on Tesfaye as he delivers a (literally) explosive performance".[24] For Bianca Gracie of Idolator, "the usually-moody singer is refreshingly energetic".[23] Jon Blistein of Rolling Stone deemed the video "simple but riveting".[25] Slava Pastuk of Noisey called the video "a bit corny, but weirdly great?"[26]USA Today Brian Mansfield wrote: "Like his previous video for The Hills, it's sometimes troubling clip, full of fire and mayhem."[27] Jason Lipshutz of Billboard opined that the video is "certainly a sonic homage to MJ, and watching the Weeknd strut around ablaze is an eery [sic] coincidence."[28] Similarly, Michelle Geslani of Consequence of Sound wrote: "Abel Tesfaye is seen busting a couple of moves -- no doubt, again, channeling Michael Jackson".[29] Eric Diep of BET also described the video as an "homage to Michael Jackson", noting similarities in the vocals and dance moves.[30]

The Weeknd performed "Can't Feel My Face" live for the first time at Apple WWDC 2015, the day before its digital release. On July 10, Taylor Swift invited The Weeknd on stage for her 1989 World Tour in East Rutherford at the MetLife Stadium.[31] The song was performed live on television for the first time at the 2015 MTV Video Music Awards.[32] The Weeknd also sang it during Victoria's Secret Fashion Show, which aired on December 8, 2015.[33]

On 6 November 2016, Martin Garrix released a remix of the song through XO lasting 4 minutes and 12 seconds.[34] The remix was featured on the Japanese edition of Beauty Behind the Madness.[35]

On August 11, 2015, Canadian alternative rock band Walk Off The Earth covered the song, and this has over 18 million views on YouTube between two versions.[36][37] The song was also covered by Australian metalcore band The Amity Affliction for the Fearless compilation Punk Goes Pop Vol. 7 which was released on June 22, 2017. The song appears as part of a mashup entitled "Can't Rock My Dream Face" on the Umphrey's McGee album Zonkey, which further incorporates parts of "Rock With You" (Michael Jackson) and "Dreams" (Fleetwood Mac). Jazz artist Jamie Cullum covered the song which was released on his online only Song Society Playlist. 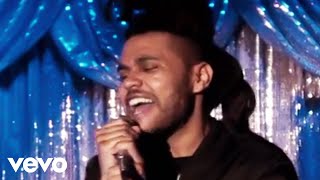 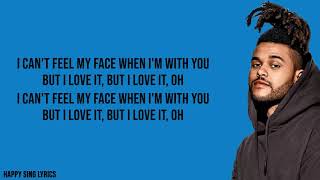 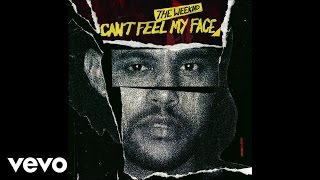 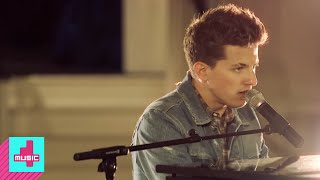 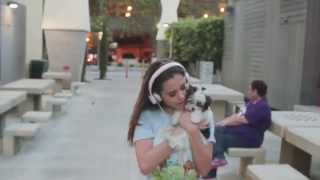 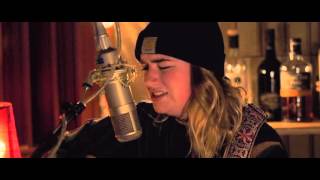 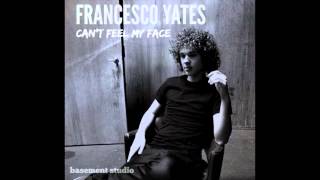 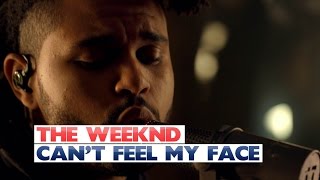 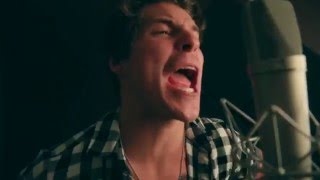 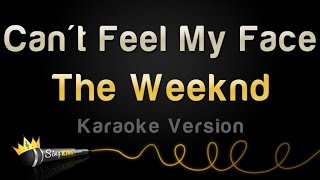 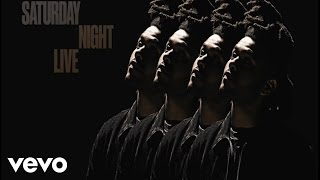 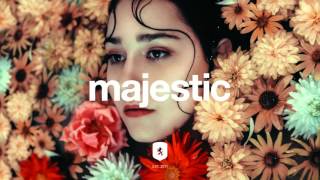 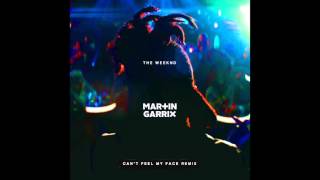 What does "Can't Feel My Face" by The Weeknd mean? | Two Minute Song Meaning Explanation
Watch   Add to List   Share 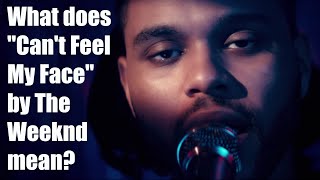 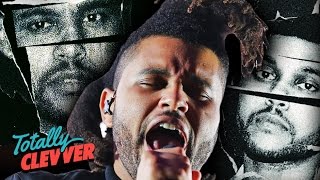 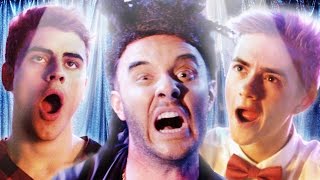 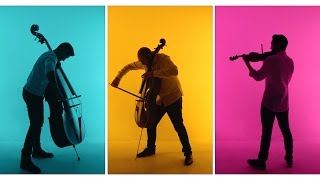