The remains of a fieldstone church in Dangelsdorf, Germany, from the 14th century

An abandoned village is a village that has, for some reason, been deserted. In many countries, and throughout history, thousands of villages have been deserted for a variety of causes. Abandonment of villages is often related to epidemic, famine, war, climate change, environmental destruction, or deliberate clearances.

Hundreds of villages in Nagorno-Karabakh were deserted following the Nagorno-Karabakh War. Between 1988 and 1993, 400,000 ethnic Azeris, and Kurds fled the area and nearly 200 villages in Armenia itself populated by Azeris and Kurds were abandoned by 1991. Likewise nearly 300,000 Armenians fled from Azerbaijan between 1988 and 1993, including 50 villages populated by Armenians in Northern Artsakh that were abandoned. Majority of the Armenian settlements and churches outside Armenia and the Nagorno-Karabakh Republic have been destroyed including those in Nakhichevan.[1][2]

In Australia, the government requires operators of mining towns to remove all traces of the town when it is abandoned. This has occurred in the case of Mary Kathleen, Goldsworthy and Shay Gap. Some towns have been lost or moved when dams are built.

In 1988, two years after the Chernobyl disaster, the Belarussian government created the Polesie State Radioecological Reserve, a 1,313 km2 (507 sq mi) exclusion zone to protect people against the effects of radiation. 22,000 people lived there in the 96 settlements that were abandoned, including Aravichy and Dzernavichy, and the area has since been expanded by a further 849 km2 (328 sq mi).

Villages have been abandoned as a result of the Cyprus dispute. Some of these are reported to be landmined.[3]

A number of villages, mainly in the north and north western areas of the country, were destroyed during World War One and World War Two. A percentage of them were rebuilt next to the original sites, with the original villages remaining in a ruined state.

There are hundreds of abandoned villages, known as Wüstungen, in Germany. Geographer Kurt Scharlau categorized the different types in the 1930s, making distinctions between temporary and permanent Wüstung, settlements used for different purposes (farms or villages), and the extent of abandonment (partial or total).[4] His scheme has been expanded, and has been criticized for not taking into account expansion and regression. A distinction is commonly made between Flurwüstungen (farmed areas) and Ortswüstungen (sites where buildings formerly stood) by archaeologists. The most drastic period of abandonment in modern times was during the 14th and 15th centuries - before 1350, there were about 170,000 settlements in Germany, and this had been reduced by nearly 40,000 by 1450.[5] As in Britain, the Black Death played a large role in this, as did the growth of large villages and towns, the Little Ice Age, the introduction of crop rotation, and war (in Germany, particularly the 30 Years War). In later times, the German Empire created a number of training grounds for the military that were eventually abandoned.

Many villages in remote parts of the New Territories, Hong Kong, usually in valleys or on islands, have been abandoned due to inaccessibility. Residents go to live in urban areas with better job opportunities. Some villages have been moved to new sites to make way for reservoirs or new town development. See also walled villages of Hong Kong and list of villages in Hong Kong.

Hundreds of villages were abandoned during the Ottoman wars in the Kingdom of Hungary in the 16-17th century. Many of them were never repopulated and generally left few visible traces. Real ghost towns are rare in present-day Hungary, except the abandoned villages of Derenk (left in 1943) and Nagygéc (left in 1970). Due to the decrease of rural population beginning in the 1980s dozens of villages are now threatened with abandonment. The first village officially declared as "died out" was Gy?r?f? in the end of the 1970s but later it was repopulated as an eco-village. Sometimes depopulated villages were successfully saved as small rural resorts like Kán, Tornakápolna, Szanticska, Gorica and Révfalu.

About ten million people, approximately one-third of the population of the affected area, are estimated to have died in the Bengal famine of 1770. Regions where the famine occurred included especially the modern Indian states of Bihar and West Bengal, but the famine also extended into Odisha and Jharkhand as well as modern Bangladesh. Among the worst affected areas were Birbhum and Murshidabad in Bengal, and Tirhut, Champaran and Bettiah in Bihar.

A partial shortfall in crops, considered normal, occurred in 1768 and was followed in late 1769 by more severe conditions. By September 1769 there was a severe drought, and alarming reports were coming in of rural distress. These were, however, ignored by company officers.

By early 1770 there was starvation, and by mid-1770 deaths from starvation were occurring on a large scale. There were also reports of the living feeding on the bodies of the dead in the middle of that year. Smallpox and other diseases further took their toll of the population. Later in 1770 good rainfall resulted in a good harvest and the famine abated. However, other shortfalls occurred in the following years, raising the total death toll.

As a result of the famine, large areas were depopulated and returned to jungle for decades to come as the survivors migrated en masse in a search for food. Many cultivated lands were abandoned - much of Birbhum, for instance, returned to jungle and was virtually impassable for decades afterwards. From 1772 on, bands of bandits and thugs became an established feature of Bengal, and were only brought under control by punitive actions in the 1780s.

Several villages in Ireland have been abandoned during the Middle Ages or later: Oliver Goldsmith's poem "The Deserted Village" (1770) being a famous commentary on rural depopulation. Notable deserted villages include:

In August 2005, Israel evacuated Gush Katif and all other Jewish settlements in the Gaza Strip. Some structures in these settlements, including greenhouses and synagogues, were left standing after the withdrawal.

Many small villages around Malta were abandoned between the 14th and 18th centuries. They were abandoned for several reasons, including corsair raids (such as the raid of 1429 and that of 1551), slow population decline, migration to larger villages as well as political changes such as the transfer of the capital from Mdina to Birgu in 1530, and to Valletta in 1571. Many villages were depopulated after a plague epidemic in 1592-93.[6]

Of Malta's ten original parishes in 1436, two (?al Tartarni and Bir Miftu?) no longer exist, while others such as Mellie?a were abandoned but rebuilt at a later stage. The existence of many of the other villages is known only from militia lists, ecclesiastical or notarial documents, or lists of lost villages compiled by scholars such as Giovanni Francesco Abela.

The villages usually consisted of a chapel which was surrounded by a number of farmhouses and other buildings. In some cases, such as ?al-Millieri and Bir Miftu?, the village disappeared but the chapel still exists.[7]

Oases and villages in North Africa have been abandoned due to the expansion of the Sahara desert.[]

Many Saxon villages in Transylvania became depopulated or abandoned when their German-speaking inhabitants emigrated to Germany in the 1990s.

The abandoned village of Merades, Spain; part of the northernmost section of the ruins.

Large zones of the mountainous Iberian System and the Pyrenees have undergone heavy depopulation since the early 20th century. In Spain there are many ghost towns scattered across mountain areas especially in Teruel Province.[8]

The traditional agricultural practices such as sheep and goat rearing on which the village economy was based were not taken over by the local youth after the lifestyle changes that swept over rural Spain during the second half of the 20th century. The exodus from the rural mountainous areas in Spain rose steeply after General Franco's Plan de Estabilización in 1959. The population declined steeply as people emigrated towards the industrial areas of the large cities and the coastal towns where tourism grew exponentially.[9]

The abandonment of agricultural land use practices drives the natural establishment of forests through ecological succession in Spain.[10] This spontaneous forest establishment has several consequences for society and nature, such as increase of fire risk and frequency and biodiversity loss.[11] Regarding biodiversity loss, The risk, research findings from Mediterranean showed that this is very site dependent.[12] More recently, the abandonment of land is also discussed by some as an opportunity for rewilding in rural areas in Spain.[13]

The Dead Cities are a group of abandoned villages in Northern Syria dating back to the times of Late Antiquity and the Byzantine Empire. They are a World Heritage Site.[14]

Following the 1986 Chernobyl disaster a 2,600 km2 (1,000 sq mi) zone of exclusion was created and the entire population was evacuated to prevent exposure to radiation. Since then a limited number of people have been allowed to returned: 197 lived in the zone in 2012, down from 328 in 2007 and 612 in 1999. However all of the villages, and also the main city of the region Pripyat, are falling into decay. The only lived in settlement is Chernobyl which houses maintenance staff and scientists working at nuclear power plant, although these can only live there for short periods of time.

Many villages in the United Kingdom have been abandoned throughout history. It could be the result of natural events, such as rivers changing course or silting up, or coastal and estuarine erosion.

Sometimes villages were deliberately cleared; the Harrying of the North caused widespread devastation in the winter of 1069-1070. In the 12th and 13th centuries, many villages were removed to make way for monasteries, and in the 18th century, it became fashionable for land-owning aristocrats to live in large mansions set in large landscaped parklands. Villages that obstructed the view were removed, although by the early 19th century it had become common to provide replacements.

In modern times, a few villages have been abandoned due to reservoirs being built and the location being flooded. These include Capel Celyn in Gwynedd, Wales, Mardale Green in the English Lake District and two villages - Ashopton and Derwent - drowned by the Ladybower Reservoir in Derbyshire. In other cases, such as Tide Mills, East Sussex, Imber and Tyneham, the village lands have been converted to military training areas. Villages in Northumberland have been demolished to make way for open cast mines. Hampton-on-Sea was abandoned due to coastal erosion thought to have been exacerbated by the building of a pier.[15]

In the United Kingdom, a deserted medieval village (DMV) is a settlement that was abandoned during the Middle Ages, typically leaving no trace apart from earthworks or cropmarks. If there are three or fewer inhabited houses, the convention is to regard the site as deserted;[16] if there are more than three houses, it is regarded as shrunken.[17] The commonest causes of DMVs include failure of marginal agricultural land and clearance and enclosure following depopulation after the Black Death. The study of the causes of each settlements desertion is an ongoing field of research.

England has an estimated 3,000 DMVs. One of the best-known is Wharram Percy in North Yorkshire, where extensive archaeological excavations were conducted between 1948 and 1990. Its ruined church and former fishpond are still visible.[18] Some other examples are Gainsthorpe in Lincolnshire,[19][20] and Old Wolverton in Milton Keynes.[21] 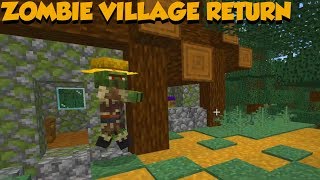 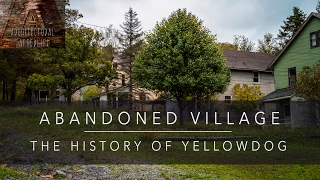 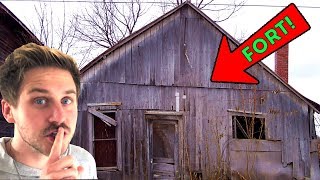 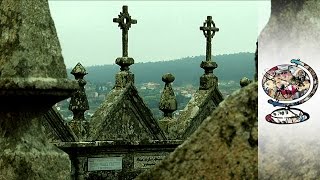 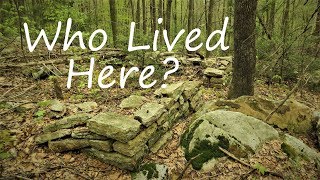 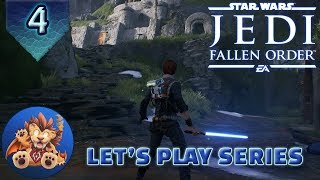 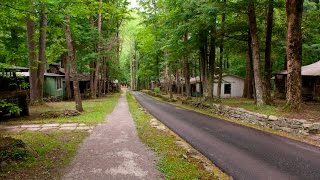 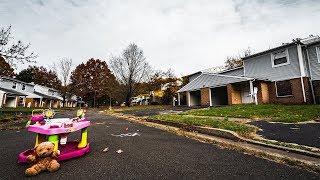 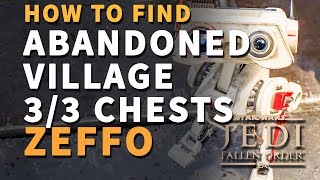 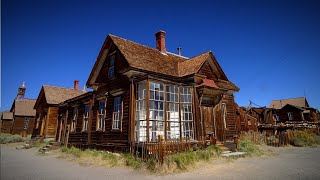 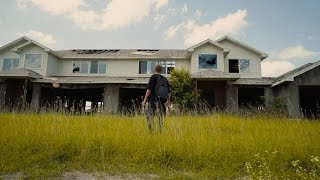 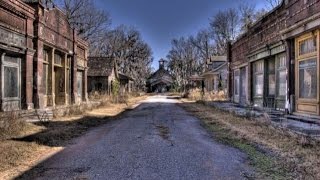 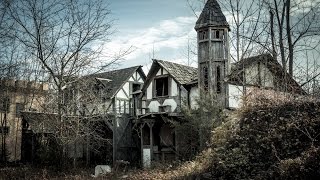 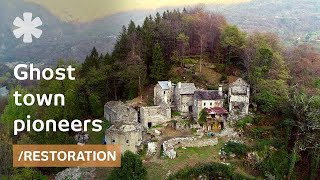 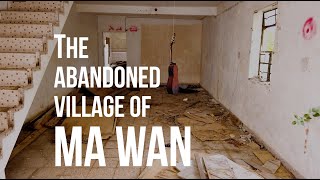 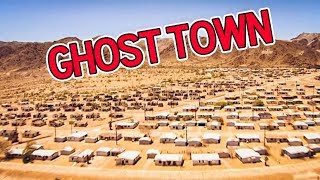 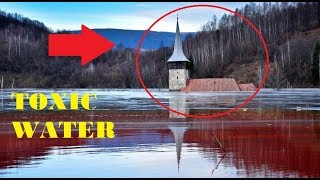 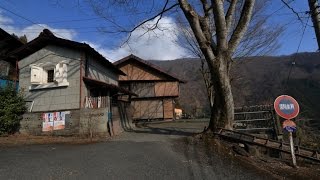 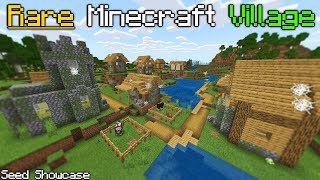 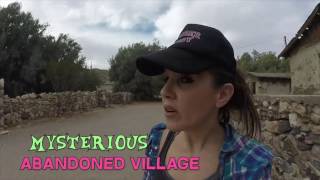