3rd Rock from the Sun is an American sitcom television series created by Bonnie and Terry Turner, which originally aired from January 9, 1996, to May 22, 2001, on NBC. The show is about four extraterrestrials who are on an expedition to Earth, the third planet from the Sun, which they consider to be a very insignificant planet. The extraterrestrials pose as a human family to observe the behavior of human beings.

The premise of the show revolves around an extraterrestrial research expedition hailing from a planet in a barred spiral galaxy on the Cepheus-Draco border attempting to live as a normal human family in the fictional city of Rutherford, Ohio, said to be 52 mi (84 km) outside of Cleveland (where The Drew Carey Show was set) where they live in an attic apartment. The show's humor is principally derived from the aliens' attempts to study human society and understand the human condition, while living as humans on Earth, reflecting on human life from the perspective of aliens. Most of the episodes are named after the protagonist, Dick. In later episodes, they have become more accustomed to Earth and are often more interested in their human lives than in their mission.

The show also takes humor from its mirroring of all human anthropological expeditions and their assumptions of superiority to the "natives", as well as their inability to distinguish themselves from the natives. Dr. Mary Albright (Jane Curtin) is a professor of anthropology at fictional Pendelton State University, and many of the issues with which the four aliens struggle appear in her conversation and work. Furthermore, these four alien researchers end up looking more or less like joyriders as they get drawn further and further into human life.

Dick Solomon (John Lithgow), the High Commander and leader of the expedition, is the family provider and a physics professor at Pendelton (with Ian Lithgow, John Lithgow's eldest son, playing one of his less-successful students). Information officer and oldest member of the crew Tommy (Joseph Gordon-Levitt) has been given the body of a teenager and is forced to enroll in high school (later college), leaving security officer Sally (Kristen Johnston) and "the one with the transmitter in his head", Harry (French Stewart) to spend their lives as 20-somethings hanging out at home and bouncing through short-term jobs. The show also involves their relationships with humans, mostly their love interests.

The family often communicates through Harry with their off-world (and usually unseen) boss, the Big Giant Head, who when he finally visits Earth, appears in the body of William Shatner. Harry unexpectedly (and often in inconvenient circumstances) stands up, his arms stiff (acting as the antenna), and proclaims: "Incoming message from the Big Giant Head."

The show's opening theme music was composed by Ben Vaughn, and for the first four seasons, it was originally a 1950s-style rock-and-roll instrumental piece; the theme was extended slightly in season three, when Simbi Khali, Elmarie Wendel, and Wayne Knight were officially made series regulars and added to the opening credits. During season one, James Earl Jones provided a voice introduction describing the crew. For Christmas episodes, jingle bells were added to the theme. The only major change to the theme was in season five, when the original Ben Vaughn version was replaced by a big band cover of the theme, performed by the group Big Bad Voodoo Daddy, and was only used during that season. For the sixth and final season, a modern jazz underline version of the theme was used.

The opening title sequence, which was produced by the London graphic design firm SVC Television, opens with computerized shots of planets and celestial bodies, some either with the planets dancing or moving in warp speed. It opens and closes with a shot of Earth (which at the open is where the show's title logo appears, after a sunburst appears on the side of Earth). For the sixth and final season only, the typeface of the cast and creators' names was altered.

Of 139 episodes of the series, 108 contained "Dick" in the title (in reference to John Lithgow's character). While some of the episode titles with "Dick" in them are innocent (i.e., "Tom, Dick and Mary", "Dick Is From Mars, Sally Is From Venus"), others are more risque and often are double entendres (i.e., "Sensitive Dick", "A Dick Replacement", "Frozen Dick", "Shall We Dick"), because the word "Dick" is both a short form of Richard and a slang term for penis. One episode from season six used an abbreviation for a title, "B.D.O.C.", since the full title ("Big Dick on Campus") was deemed too risque.

During the show's sixth and final season, John Lithgow commented to several media outlets that 3rd Rock had been moved to more than 15 different time slots in six years, causing its ratings to decrease substantially.

In the United States, the series is distributed for syndication by Carsey-Warner Distribution, and entered broadcast syndication in September 1999 along with The Drew Carey Show, where it continued until the fall of 2004, when the show moved into limited-run barter syndication, where it remained until 2016; The Program Exchange handled distribution for Carsey-Werner.[1]ABC Family aired reruns between 2002 and 2006. Reruns of the series aired on TV Land from 2008 through 2010. In the fall of 2010, ReelzChannel began airing the series. The series made its debut on digital broadcast network Laff on July 16, 2018.

This series rerun is now also aired on Malaysia's national broadcast TV channel RTM's TV2 in the 12:30 am time slot on Tuesday and Wednesday nights.

In the United Kingdom, the series originally aired on BBC Two from 1996 to 2002, and ITV2 later reran the entire series from 2005 to 2006. Cable network Virgin Media currently has 40 episodes from seasons one and two available on demand from the Comedy Central menu option. The series began airing from the beginning on Channel 4 from May 12, 2014,[2] but moved to 5Star in January 2019.

In the Republic of Ireland, channel 3e reruns the show during the late-night slot after Conan at 12:30 am.

Netflix made the complete series available online in March 2011. It was removed several months later in the fall of 2011, but returned on March 15, 2015, and was removed again exactly two years later. It is available through Amazon Prime Video, Hoopla, Pluto TV, and Tubi.

In the fall of 2011, Canada's TVTropolis cable channel began airing the show, and featured a long weekend marathon run of episodes.

The series is currently available to stream for free on Tubi,[3] Pluto TV,[4] Crackle,[5] Vudu,[6] IMDb TV[7] and Peacock (including the paid subscription tier).[8]

Region 1
Anchor Bay Entertainment released all six seasons of 3rd Rock from the Sun on DVD for the first time in 2005-2006.[9][10][11][12][13][14] Seasons 1 & 2 contain the edited, syndicated versions of the episodes instead of the original broadcast versions. As of 2010, these releases have been discontinued and are out of print. On these DVDs, the bloopers segments (on the last disc of each season) are in 16:9 format, indicating the series may have been filmed in 16:9 format.

On May 4, 2011, Mill Creek Entertainment announced they had acquired the rights to re-release the series on DVD in Region 1.[15] They have subsequently re-released seasons 1-4. These releases contain the unedited, original broadcast versions of the episodes.[16][17] Seasons 5 and 6 were re-released on January 8, 2013.[18][19][20]

Region 2
Network DVD released all six seasons on DVD in the UK. While seasons 1-4 feature unedited versions of the episodes, seasons five and six feature syndicated, edited episodes. Network re-released the series in 2008 in an individual set and a complete collection.

Region 4
Magna Home Entertainment released all six seasons on DVD in Australia between 2005 and 2007. These releases have been discontinued and are now out of print.

Digital
All seasons became available to stream through Netflix in January 2012. On February 4, the series was removed, although returned on March 15, 2015. The series has since been removed.[43]

In the UK, the first two seasons were available to download through the UK iTunes store but are no longer offered, and no episodes or seasons have been made available digitally in the region since.

In the US, all six seasons are currently available for individual purchase through the US iTunes store in their original, full-frame, standard definition formats. The Complete Series is also available to Amazon Prime users to stream through Prime Video in the US.

In 1997, 3rd Rock won the most Primetime Emmy Awards (five from eight nominations) for a television series:

John Lithgow received an Emmy Award nomination for Outstanding Lead Actor in a Comedy Series for each year the show was broadcast, winning the Emmy in 1996, 1997, and 1999. Accepting the 1999 award, he said, "Many wonderful things have happened to me in my life, but the two best are 3rd Rock and my dear family."[50]

A tie-in book, 3rd Rock from the Sun: The Official Report On Earth, was released in 1997. It is essentially a report of the Solomon's findings during their stay on Earth. Primarily a source of humor, the book includes such features as "What to do if you encounter Jell-O", a fan biography of Katie Couric written by Harry, and Sally's version of a Cosmo quiz. Portions of the book are included in the booklets inside each season set of the series.

Despite the report's being set within the fictional world of 3rd Rock, a foreword written by John Lithgow himself is included in which he explains how he was abducted by the 3rd Rock producers and forced to work on their production. A Post-it note is attached to the foreword, apparently written by Dick Solomon, stating he does not know why the foreword is there, but that Lithgow is an Earth actor who appeared in "some helicopter movie". 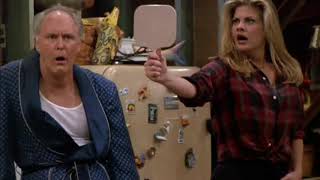 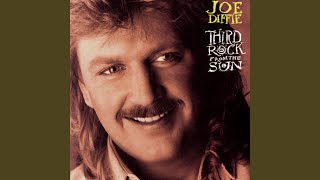 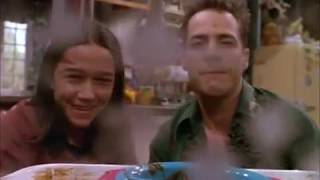 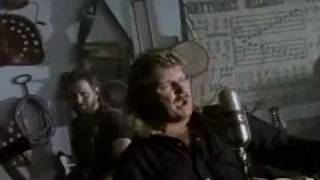 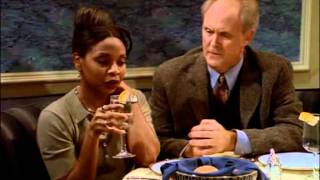 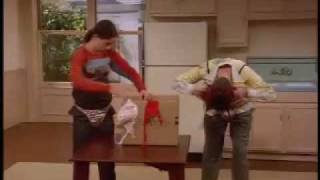 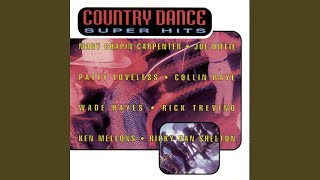 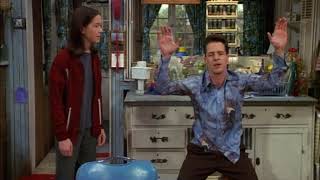 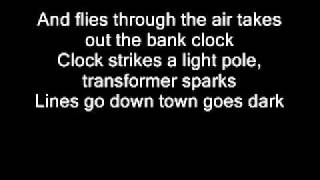 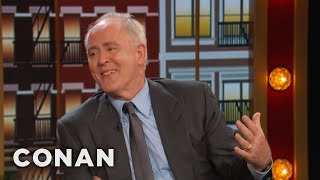 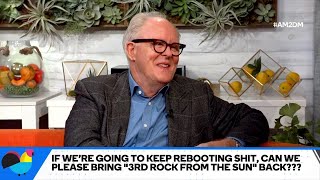