The 2000-01 NBA season was the Rockets' 34th season in the National Basketball Association, and 30th season in the city of Houston.[1] In an effort to shore up their front line, the Rockets signed free agent Maurice Taylor during the offseason. After the retirement of Charles Barkley, second-year star Steve Francis continued to emerge as the new star of the Rockets averaging 19.9 points per game. The Rockets got off to a 13-9 start to the season, but then went on a six-game losing streak afterwards. They would recover and play above .500 for the remainder of the season. However, the Rockets missed the playoffs despite finishing fifth in the Midwest Division with a winning record of 45-37, which was two games behind the 8th-seeded Minnesota Timberwolves. This season marked an end of an era as Hakeem Olajuwon was traded to the Toronto Raptors following the season.[2] Also following the season, Shandon Anderson was traded to the New York Knicks. 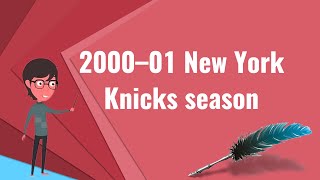