The 1992-93 NBA season was the Rockets' 26th season in the National Basketball Association, and 22nd season in Houston.[1] For the season opener, the Rockets traveled to Tokyo, Japan to play their first two games against the Seattle SuperSonics.[2] The Rockets struggled during the first two months of the season, posting a 7-game losing streak with a 14-15 record. However, they won eight consecutive games afterwards, then posted 15 and 11-game winning streaks respectively between February and April. The Rockets finished first place in the Midwest Division with a 55-27 record. Hakeem Olajuwon was named Defensive Player of The Year, and was selected for the 1993 NBA All-Star Game. In the first round of the playoffs, they defeated the Los Angeles Clippers in five games, but lost in seven to the SuperSonics in the semifinals.

A notable note about the Rockets' playoff run that year was the final game of the regular season. The Rockets were playing against the San Antonio Spurs with the Rockets leading by 2 in the final seconds, until David Robinson tip-dunked a missed shot after time expired.[3] It was ruled good, and the Rockets went on to lose in overtime, tying their record with Seattle, and losing home court advantage due to their match-up tie-breaker against the Sonics, and ended up losing the decisive Game 7 in overtime at Seattle. Following the season, Sleepy Floyd signed as a free agent with the San Antonio Spurs. 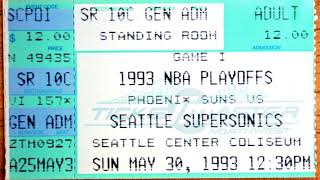